Not all readers become leaders, but all leaders must be readers.

Books written about Harry S. Truman or the period of his presidency and published between January 1, 2020 and December 31, 2021 are eligible for the 2022 Harry S. Truman Book Award. To inquire about submission, contact Lisa Sullivan at Lisa.Sullivan@TrumanLibraryInstitute.org or 816.400.1216. 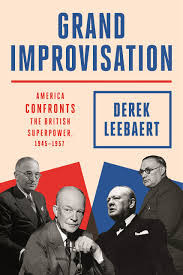 The Truman Library Institute has awarded Derek Leebaert the 2020 Harry S. Truman Book Award for Grand Improvisation: America Confronts the British Superpower, 1945-1957. Leebaert leads a global management consulting firm and is author of several award-winning books, including Magic and Mayhem: The Delusions of American Foreign Policy and To Dare and to Conquer: Special Operations and the Destiny of Nations.

2016       Potsdam: The End of World War II and the Remaking of Europe by Michael Neiberg

2008       From Roosevelt to Truman: Potsdam, Hiroshima, and the Cold War by Wilson D. Miscamble

2004       Act of Creation: The Founding of the United Nations by Stephen C. Schlesinger

See all recipients since 1967 here.

Truman faced challenges on the world stage that no other president has had to face and whether his decisions were right or wrong (and they are still in debate today), he had the guts to make them.