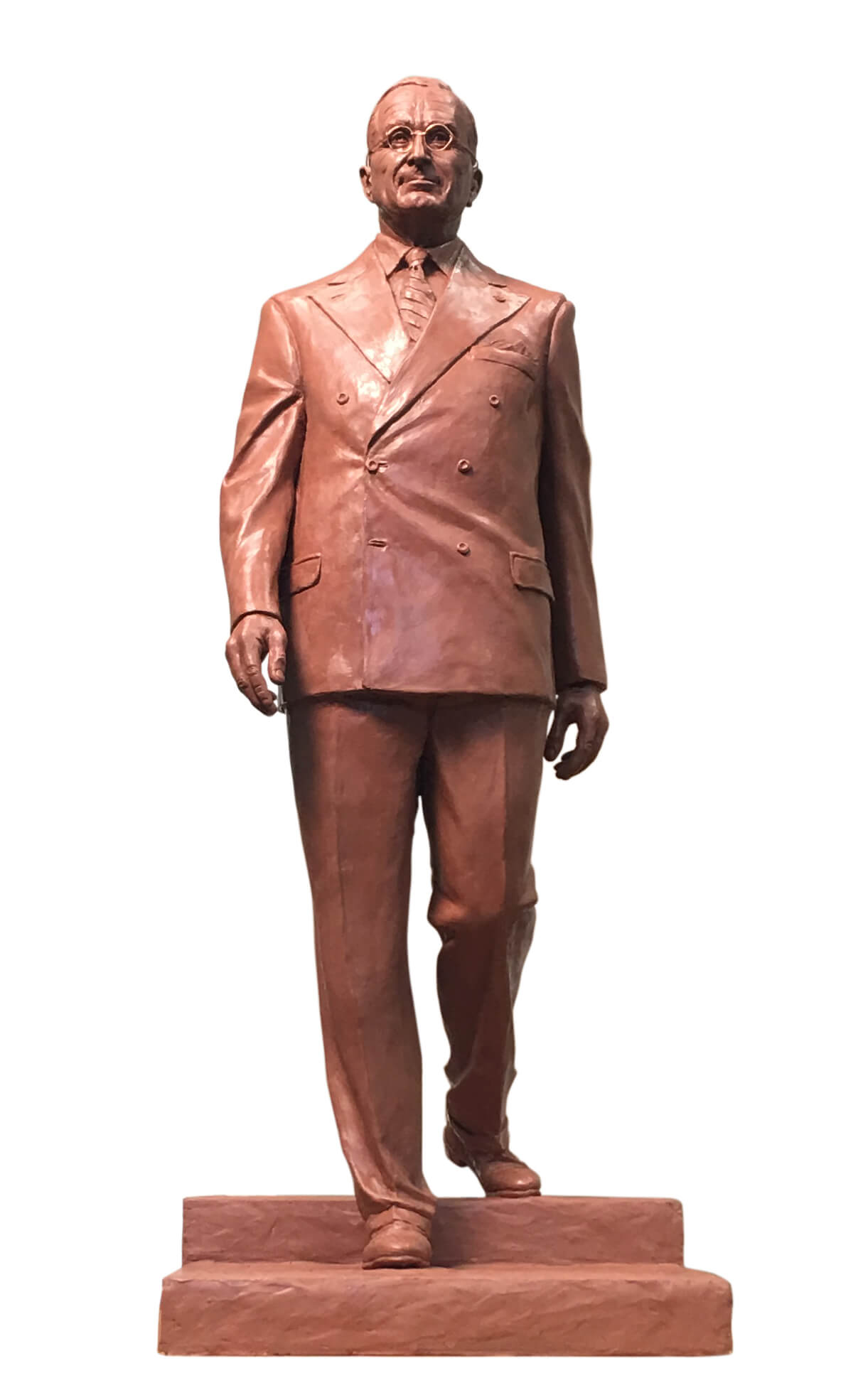 After nearly 75 years, Harry Truman is headed back to Washington. The Truman Library Institute is proudly spearheading the effort to finance, create and install a newly commissioned bronze statue of America's 33rd President.

A committee of Truman family and friends along with current and former Institute board members reviewed proposals from six artists and presentations from four finalists before choosing Kansas City based sculptor Tom Corbin.

“Now, more than ever, it’s important to remind Americans and the more than 3 million annual visitors to our nation’s capital that President Truman’s legacy is worth remembering and honoring,” said Institute Board Chair Clyde Wendel. “The Truman Statue Committee agreed that Tom Corbin was best able to capture the essence of our 33rd president.” Show more

Tom Corbin’s work can be seen in over 22 showrooms and galleries internationally. Locally, his artistic prowess can be viewed in public installations at the Country Club Plaza, Kauffman Foundation, Firefighter’s Memorial, Children’s Fountain, and the University of Missouri- Kansas City, among many others. Upon receiving the commission, Corbin said, “Being chosen as the sculptor to complete this monument is an immense honor, to say the least. Portraying this amazing man through my art will be the highlight of my career.”

In 2019, the Missouri Senate unanimously passed a resolution to remove the statue of Thomas Hart Benton, a Missouri statesman who served five terms as one of Missouri’s first two U.S. senators (and is the great-great-uncle to the famous painter whose mural, Independence and the Opening of the West, is on view in the lobby of the Truman Library). The resolution then was approved by the Missouri House of Representatives and Governor.  The anticipated installation event in Washington D.C. will take place in the spring of 2022.

Each year, the Truman Library Institute invests more than a half-million dollars in nationally acclaimed educational programs for schoolchildren and their teachers, who rely on our nation’s best presidential museum as an essential resource for history education. These programs help them to not only learn, but also embrace the study of history, government and the importance of civic engagement.   Show more

Your support helps open the doors to some of the greatest lessons in leadership our country has to offer, including The White House Decision Center, Guided Museum Tours, Educational Outreach Programs, Research Grants and Awards program, Teacher in-service training and workshops, the Summer Teacher Institute, and National History Day.

Truman’s legacy teaches students that by our values, decisions and investments, ordinary people can make and extraordinary difference. It’s why kids love Harry Truman – in him they can see their own potential for greatness.

It can be argued that there would be no Truman Library, no President Truman, if there had been no Captain Harry.  For Harry Truman – and this is true for countless men and women – uniformed service changed the course of his life and set him on a path that eventually led to the White House. He rose to the world’s highest office but never forgot those whose service to our great country was offered in the trenches. Show more

Founded in 2012, the annual Veterans Day program at the Harry S. Truman Library and Museum is named in honor of Caption Harry Truman and Congressman Skelton, forever recognizing their passion and dedication to our nation’s active and retired military personnel.

The recent economic downturn has decimated local school districts’ budgets, which in turn has dramatically diminished teachers’ abilities to expose their students to valuable learning opportunities outside of their classrooms. Show more

Special exhibition underwriters provide the funds which enable the Harry S. Truman Library and Museum to continue presenting exciting temporary exhibits that complement our permanent exhibitions and make each visitor’s experience more compelling and informative. These exhibits further share chapters in Harry Truman’s life – stories that will help future generations understand and appreciate the high standard to which we should hold all of our nation’s leaders accountable.

For more information, please call the Development Office at 816.400.1214 or email kim.rausch@TrumanLibraryInstitute.org

Truman faced challenges on the world stage that no other president has had to face and whether his decisions were right or wrong (and they are still in debate today), he had the guts to make them.