Harry Truman Is Back in Washington!

More than 75 years after ascending to the presidency, Harry Truman is back in Washington, D.C. For nearly two decades, Missouri leaders have sought to secure a place for Truman – consistently ranked among our nation’s greatest leaders – in the National Statuary Hall Collection. Today, the dream is a reality. A newly commissioned bronze statue of President Truman was unveiled and dedicated in the U.S. Capitol Rotunda on September 29, 2022. Truman’s statue is the tenth presidential statue in the Capitol Rotunda, flanked by George Washington and Ulysses S. Grant.

The Truman Library Institute – the non-profit partner of the Harry S. Truman Library and Museum – spearheaded the campaign to create and fund the new Truman Statue. A committee of Truman family and friends, along with current and former Institute board members, reviewed proposals from six artists and presentations from four finalists before choosing Kansas City-based sculptor Tom Corbin.

Harry S. Truman’s story is richly and uniquely American. From humble beginnings, he rose to become the most powerful man in the world. For nearly eight years, he guided our nation and the world through perilous times, from the ending of World War II to the beginning of the Cold War. The list of Harry Truman’s difficult and world-shaping decisions is long and unparalleled. Today, he is consistently ranked among the top five American leaders. Truman’s legacy of principled and decisive leadership is the standard that U.S. presidents now and forever will aspire to.

NEWS RELEASE: The Truman Statue – Why Truman, Why Now

The Truman Statue has been received into the National Statuary Hall Collection and permanently installed on an inscribed pedestal in the U.S. Capitol Rotunda. In addition to its active use by Congress, the U.S. Capitol is a museum of American art and history. Each year, it is visited by an estimated 3 to 5 million people from across the nation and around the world.

The Honorable Roy Blunt
“It’s great for us today to see him now in the building he loved, in a democracy he cherished, in a world that he did so much to design and create….No president in such a short period of time made more consequential decisions than Harry Truman.”

U.S. Rep. Emanuel Cleaver II
“The world needs to know about this man from Missouri who did so much for this country… He is a giant, and giants must always be remembered.”

Clifton Truman Daniel, President Truman’s Eldest Grandson
“There’s no better place to explore Truman’s story than at his presidential library, but for the millions who may never walk through those doors, there will soon be another chance to come face to face with my grandfather. To everyone who has worked to make this a reality, to everyone now joining the campaign: my family and I can’t thank you enough for envisioning, creating and funding this enduring monument as a tribute to Grandpa’s leadership and legacy.”

Alex Burden, Executive Director, Truman Library Institute
“At the heart of the Institute’s mission is a steadfast commitment to promoting President Truman’s legacy. I firmly believe that there’s no better way to advance that mission than with this highly visible effort to bring Harry Truman back to Washington, D.C.”

Tom Corbin, Sculptor
“Portraying this amazing man through my art is the highlight of my career.”

The Making of the Truman Statue

The installation of the Harry S. Truman Statue in the Capitol Rotunda is made possible thanks to the efforts of a group of dedicated volunteers and community leaders. These faithful friends shared their time and talents over the past six years to ensure Truman’s story stands as a shining example in our nation’s capital. This extraordinary legacy project was made possible by generous gifts from organizations and individuals across the country.

We are in the final stages of the Truman Statue Campaign, but there’s still time to be part of this once-in-a-lifetime opportunity and to be recognized in TRU Magazine and at the Harry S. Truman Presidential Library & Museum.

If you have any questions or would like to learn more about the Truman Statue Campaign, please contact:

Donate to the Truman Statue Campaign 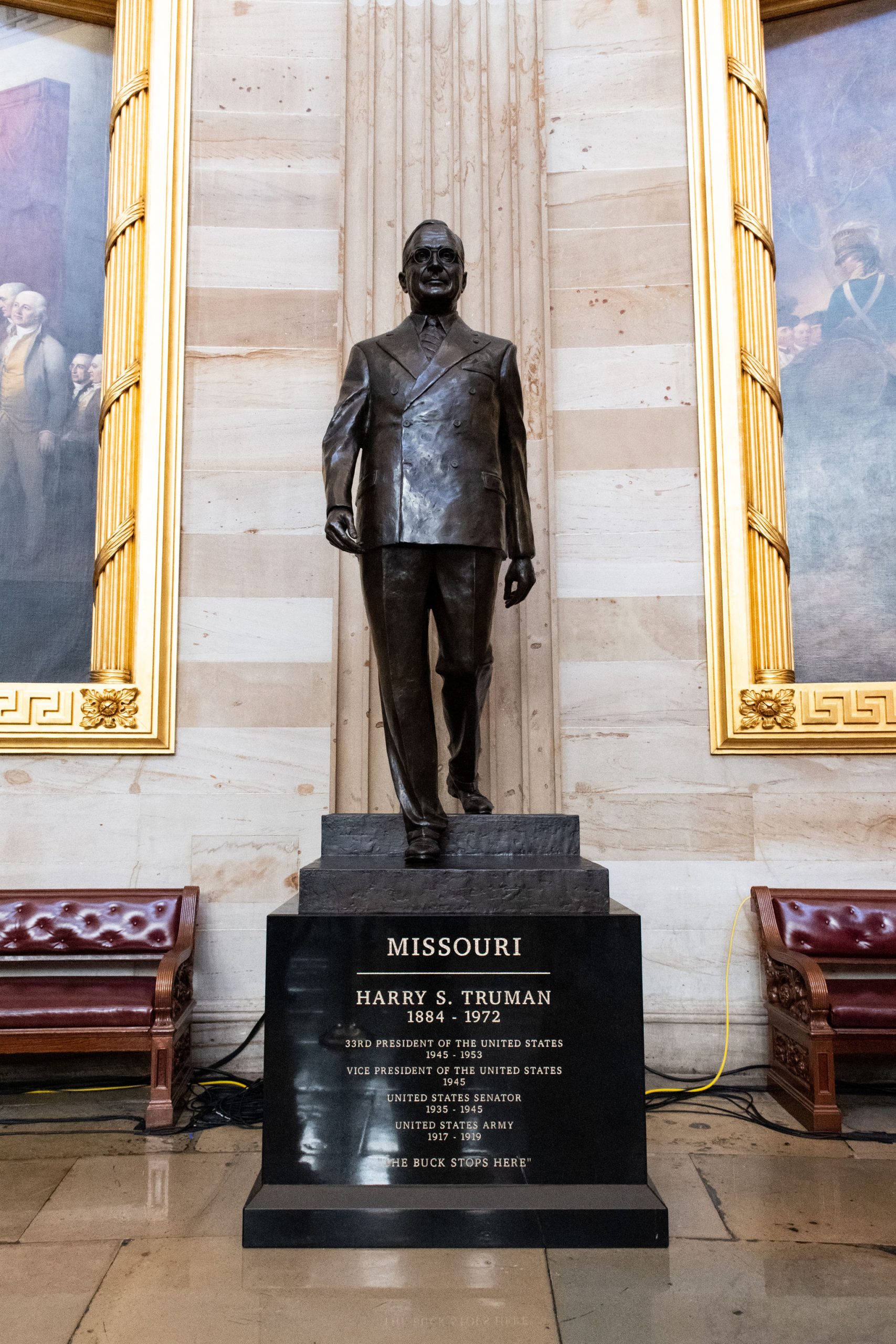