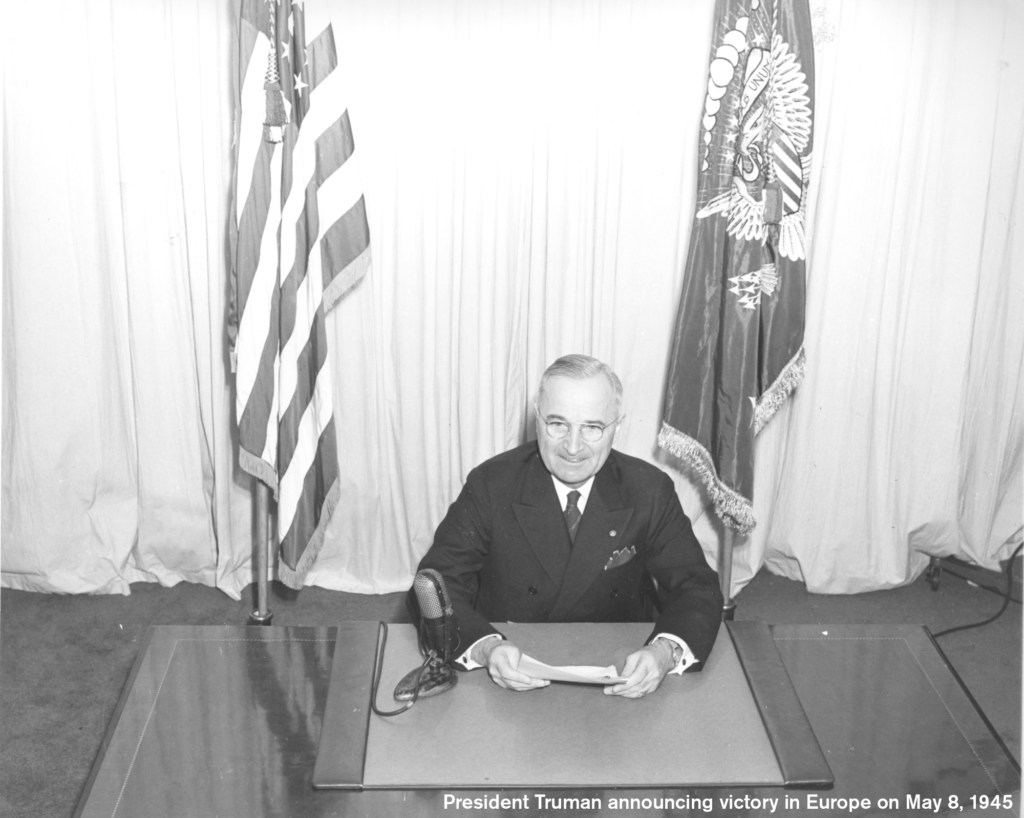 INDEPENDENCE, Mo. – The Truman Library Institute and the Harry S. Truman Library and Museum will commemorate the 75th anniversary of V-E Day and Harry Truman’s 136th birthday on May 8, 2020 with a special online initiative presented in honor of this milestone.

Harry Truman announced Germany’s surrender early on his 61st birthday, May 8, 1945. “This is a solemn but glorious hour,” the President said. “General Eisenhower informs me that the forces of Germany have surrendered to the United Nations. The flags of freedom fly all over Europe.”

The Institute is recognizing the noble sacrifices of World War II veterans through a social media initiative in honor of V-E Day. The community is invited to share stories honoring their family and friends who served in World War II and subsequent wars by commenting on posts on the Institute’s Facebook, Twitter and Instagram channels.

Throughout 2020, the Institute is also presenting a 25-part blog series, Marching to Victory: WWII Highlights from the Truman Library’s Archives and Collections, observing the 75th anniversary of the end of World War II. The series opens the vaults of Truman’s presidential library to share eyewitness accounts and historic artifacts from the end of World War II, with 11 posts already published and more to come leading up to the unconditional surrender of Japan in September.

“Now more than ever, our nation looks to Harry Truman’s example leading the country through the end of World War II and in the rebuilding years that followed,” said Dr. Kurt Graham, Director of the Truman Library. “While we wish we could celebrate the 75th anniversary of V-E Day and our favorite president’s birthday with public events, we look forward to commemorating this important day through our digital initiatives.”

The Truman Library Institute has prepared a media gallery (bit.ly/Truman75thMedia) in observation of the 75th anniversary of Truman’s presidency with video, audio, photos, and artifacts of key moments from the first four months of the Truman presidency. The V-E Day folder includes audio of President Truman announcing the German surrender, photos of his Oval Office address and video of the end of the war in Europe. Graham and other Truman experts are available for interviews by online video, phone, and email.

The Truman Library is currently closed for a transformative renovation, with construction continuing consistent with public health and safety guidelines. The work remains on schedule for completion in 2020. Preview the all-new 12,000-square-foot exhibition in this fly-through video.