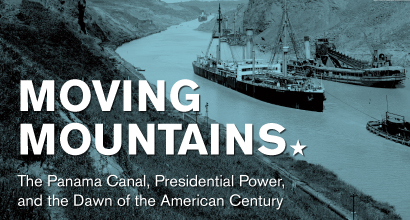 Moving Mountains: The Panama Canal, Presidential Power, and the Dawn of the American Century

The exhibition is on display at the Truman Forum, located within the Plaza Branch of the Kansas City Public Library. Show more

Presented by the Truman Library Institute

To mark the centennial anniversary of the Panama Canal’s completion, the Truman Library Institute created and launched an original exhibition highlighting the presidential past of the isthmian passageway. Moving Mountains: The Panama Canal, Presidential Power and the Dawn of the American Century draws on the rich history preserved in our nation’s presidential archives – including the Truman Library – to share a story which is much broader than the creation of the Panama Canal. It is the story of America itself and the underlying spirit of achievement that has made this nation great.

Plan your next visit to the Harry S. Truman Library and Museum. Members enjoy free Museum admission, not only at the Truman Library but at all Presidential Libraries of the National Archives.

Amazing history! We had a wonderful time learning about Harry Truman and his service to our country.