A Look at Truman’s Influence on the Conclusion of World War II | January 15, 2016 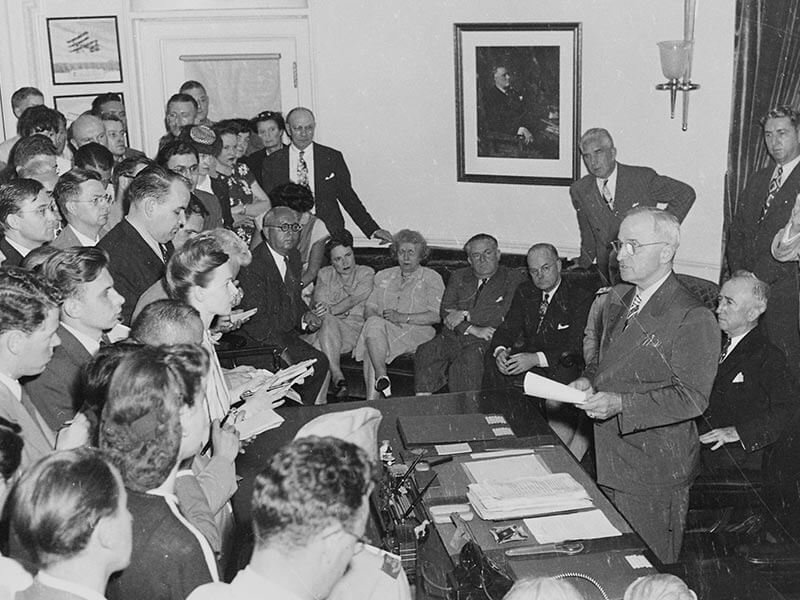 World War II has become a core aspect of both United States and World History. It is a subject that returns to our minds and hearts annually as lessons from the Holocaust, knowledge of the atomic bomb, and world relations post-war circle back into our news-stream and moral consciousness.

President at the conclusion of the war, Harry Truman is not nearly as often associated with America’s military feats during the epic war as is President Roosevelt, but it was Truman and not FDR who took the steps necessary to end the war and bring about the conclusion that we know too well.

A Brief Timeline of WWII

President Truman was the Vice-President to FDR for less than 90 days before stepping into the role of President and Commander in Chief. This was April 12, 1945, a mere five months before the world war would come to an end. However, at the time, while the end of the war was longed for and looked by some to be imminent, there was no sure-end of the war in sight. It required a great deal of Presidential action and severe decisions to bring about the conclusion of World War II. While FDR was the President in charge at the beginning of the war, it was Truman’s actions that brought the war to an end.

Within 15 days of taking Presidential office, both Mussolini and Adolf Hitler met their death. A day before Hitler’s death and only two days after the death of Mussolini, German forces in Italy surrendered.  This accelerated the end of the war, as German forces in Berlin surrendered to the Allies on May 2nd, marking the third week of Truman’s presidency.

Over the next week German forces would continue to surrender, but that did not bring an end to the war. There was still tension with Japan and Russia, and funding for the war was growing thin.

At this time the three heads of state from the United States, the United Kingdom and the USSR, Truman, Winston Churchill and Joseph Stalin, respectively, met at the Potsdam Conference. This is where the fate of Germany and much of Europe was decided.

Regarded the most difficult decision of Truman’s life, let alone his Presidency, Harry Truman made the choice to drop the atomic bomb on Japan. On August 6, 1945, the atomic bomb was dropped on the city of Hiroshima. This caused the immediate death of more than 70,000 people, but did not bring an end to the war. On August 8th, The USSR declared war on Japan, which would further exacerbate the global situation.  The very next day the United States dropped the second bomb on the city of Nagasaki. Japan surrendered five days later.

While his decision to drop the bomb essentially ended the war, the use of the atomic bomb ushered in decades of unrest and instability as threats of further use of the weapons echoed across the world, most resoundingly in the USSR and the United States.

World War II was declared officially over on September 2, 1945, exactly six years and one day after it began. While Truman helped to usher in the end of the war, he also opened Pandora’s Box in regards to nuclear weaponry and unsettlement regarding the atomic bomb. This uneasiness would shape into what became known as the Cold War, and the threat of further conflict with the USSR remained Truman’s primary concern for the remainder of his Presidency.