President Harry S. Truman and President Lyndon B. Johnson enjoyed a friendship stemming from a shared belief in national healthcare, civil rights, and other policies that endured through Johnson’s presidency and beyond. Johnson attributed many of his successes to the early steps that Truman took on these important policies. “It was really Harry Truman of Missouri who planted the seeds of compassion and duty which today have flowered into care for the sick and serenity for the fearful,” Johnson said. END_OF_DOCUMENT_TOKEN_TO_BE_REPLACED

A Note from Clifton Truman Daniel Clifton Truman Daniel is the oldest grandson of President Truman and a former newspaper writer, editor and public relations professional. He lectures on his grandfather and plays President Truman in the one-man show, “Give ‘Em Hell Harry!,” the first time in history a U.S. president is being portrayed onstage by a descendant. In addition to his honorary chairmanship of the Truman Library Institute, Daniel is also board secretary of the Truman Scholarship Foundation.

He wrote the following reminiscing about a memorable holiday with this grandfather:

When I was five or six, my father took me to the Macy’s Thanksgiving Day Parade. I fell in love with the band uniforms – the buttons, the braid, the plumes on the helmets. Later, when Dad asked me what I wanted for Christmas, I said, “One of those.” END_OF_DOCUMENT_TOKEN_TO_BE_REPLACED 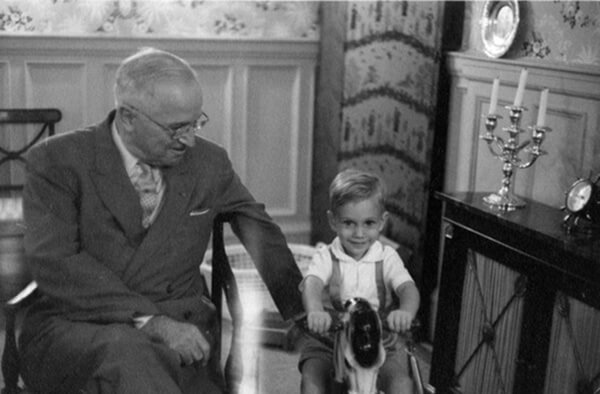