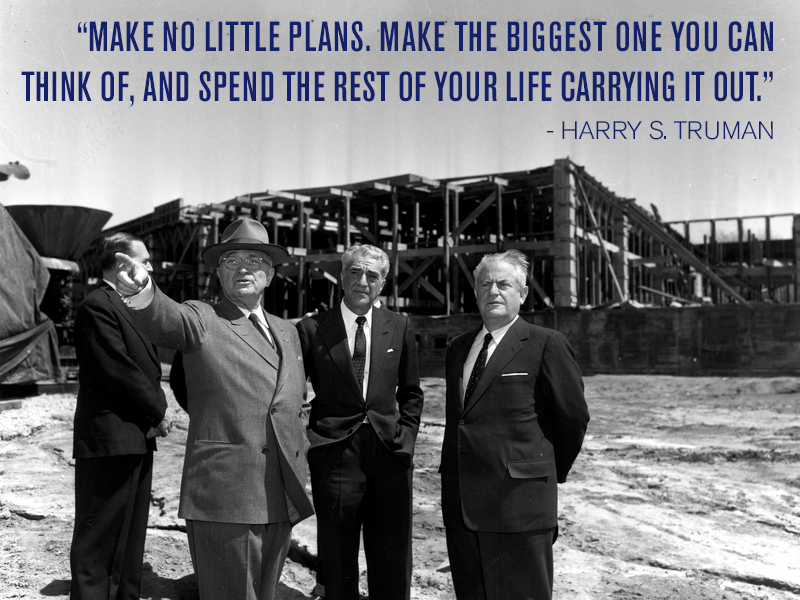 When the Midwestern farm boy who never went to college assumed the presidency in the final months of World War II, he inherited a worldwide catastrophe. With his “Buck Stops Here” leadership, he created post-war order at home and abroad. The new Truman exhibition will explore these achievements, from the Truman Committee and the Truman Doctrine to desegregating the military and recognizing Israel, for a 21st-century audience.

As the renovation completion date comes into view later this year, the Truman Library is looking more and more like the finished project. Here are a few renderings from the fly-through presentation alongside photos of the current progress. It’s exciting to see our plans become a reality.

The new museum entrance has been fully enclosed.

Inside, the new museum lobby starts to take shape, including a museum store, one-stop admission and information desk, and convenient access to all of the Library’s attractions.

The Legacy gallery provides a memorable view of the eternal flame and the gravesites of President and Mrs. Truman. The gallery also includes a video of Walter Cronkite’s broadcast of Truman’s 1972 funeral in the courtyard.

Construction in the galleries is now complete and JE Dunn is on schedule to finish the new entrance in July. The exhibit fabrication team, 1220 Exhibits, is putting final touches on the first round of elements to be installed beginning this month. The WWI theatre, fourteen-foot “Hard Problems of Peace” globe, and White House columns in the Truman’s Washington gallery will be the first to come to life. The following images highlight the exciting progress that is taking place in several galleries.

The exhibit fabricator’s scenic team is recreating the French battlefields of WWI, which will be joined with a field gun and caisson from the museum collection, in Captain Harry’s immersive theatre experience.

A recreated C-54 Skymaster fuselage is being prepared for installation in the Postwar World gallery. It will house hands-on interactives including an animated Berlin Airlift station and a video about the Candy Bomber.

Red carpet will soon be joined by a colonnade in the Truman’s Washington gallery.

Behind the scenes, Monadnock Media is finalizing the new exhibition’s fantastic audio visual elements, including the Loyalty Oath interactive. This role-playing experience puts visitors in the position of Review Board interrogators rooting out communist influence and infiltration before the tables are turned and visitors suddenly find themselves caught up in the Red Scare.

A rendering of the Loyalty Oath interactive with a sample of the on-screen experience for each of the six players.

Next week, the exhibit fabricator will spend a week at the Library measuring and patterning every object slated for installation in the new permanent Truman exhibition, including Truman’s 1949 inauguration top hat, a Samurai sword presented to Truman after WWII, and Margaret Truman’s tricycle. After the display cases are installed in July, the artifacts will be arranged inside them on custom mounts, and the audiovisual team will arrive to program the immersive theatres and multimedia interactives. The project is still on schedule and we are currently planning to reopen this fall.

We are pleased to be able to share this exciting progress with you. Stay tuned for updates as exhibit installation begins and the Library reopening nears.

We cannot assume that the rising generation will somehow absorb lessons from Truman’s life and presidency by osmosis. For these lessons to be learned, they must be taught.

Now, more than ever, the highest quality civics education is essential for creating informed, responsible citizens. Just as history guided President Truman to make decisions that impact and elevate our country and the world to this day, the lessons learned at the Truman Library will be a guiding star for generations to come.

This historic renovation is five years in the making and we’re so close to the finish line!

$2 million is all that stands between our nation’s future leaders and their ability to learn from, and be inspired by, one of our nation’s greatest presidents. The Truman Library Institute needs your generous support to ensure that Truman’s legacy is shared and that his “Buck Stops Here” leadership is not forgotten.

Please consider making a tax deductible contribution to the Stay Tru Capital Campaign and help us honor our nation’s 33rd president and his remarkable legacy that forever changed our world for the better.