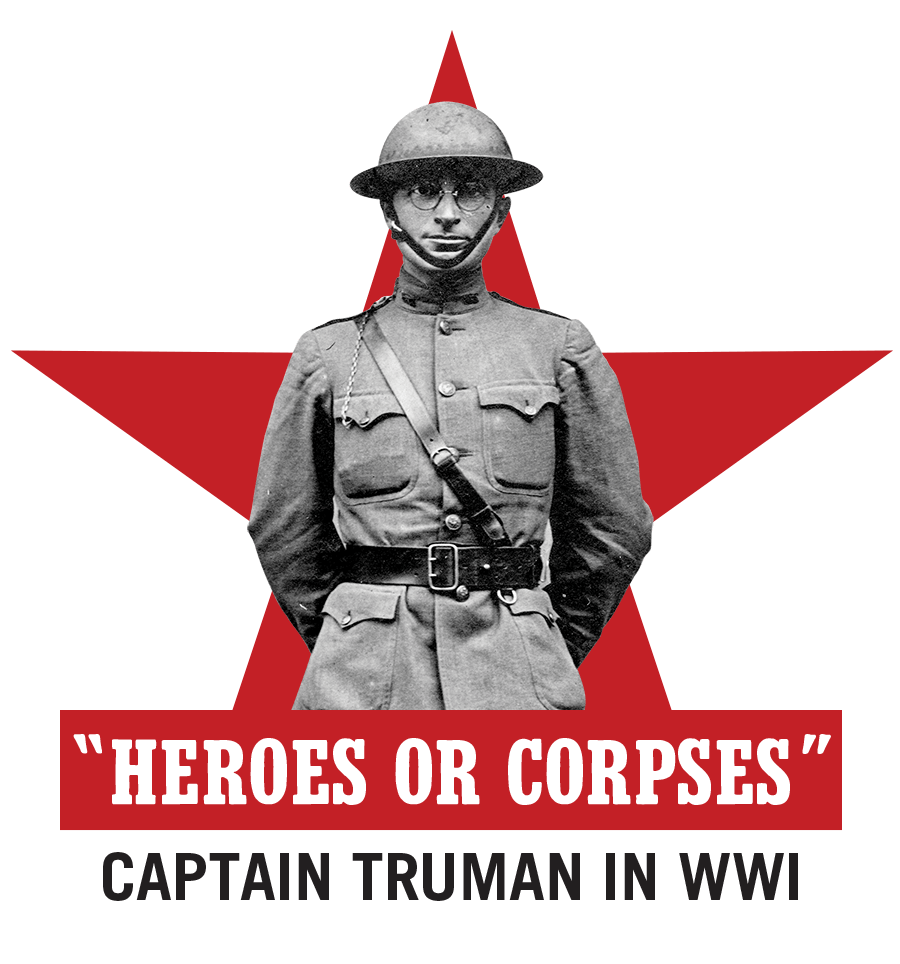 The Harry S. Truman Library and Museum is commemorating the 100th anniversary of Truman entering combat during World War I this year through a new temporary exhibition, ‘Heroes or Corpses’: Captain Truman in World War I. We went behind the scenes and spoke with Curator Clay Bauske about this new exhibition. 2018 is the 100th anniversary of Harry Truman entering combat during World War I. Why is it important for the public to immerse themselves in Truman’s WWI experience 100 years after he served?

The Truman Library has been working with the National World War I Museum and other organizations for several years now to commemorate the centennial of World War I, and there have already been a number of cooperative events to mark the anniversary. The culmination of the Library’s commemoration of the centennial is this exhibition on Harry Truman’s personal journey through the war – a topic that the Truman Library is uniquely positioned to explore. The broader story of the war itself is detailed in depth only a few miles away at the National World War I Museum, but the Truman Library is best positioned to focus on the experiences of one man who happened to become president later in his life.

What is your favorite story of Truman’s time in World War I?

Perhaps the most memorable combat story is what the battery called “The Battle of Who Run.” Battery D had moved to a new position in wet and muddy conditions in September 1918. Two of the battery’s artillery pieces got stuck in the mud on a hillside. Following an American artillery barrage on German positions, there was a silent pause for a few minutes before German guns started shelling Battery D’s position. In their first exposure to combat, many of the battery’s soldiers and horses broke and ran. Truman and a handful of others in Battery D held their ground amid the fierce shelling, while Truman screamed certain unprintable epithets to his scattering men, most of whom then returned to their positions. The episode demonstrated that many of the tough and ornery Irish Catholics of Battery D were not so tough in the face of battle, while their small bespectacled captain courageously held his ground. The episode bolstered the respect that many men of his battery had for him.

Outside of combat, Harry Truman the history buff reveled in touring historic places in France and amazed many of his colleagues with his detailed knowledge of French history. The Missouri farmer, they learned, had an encyclopedic knowledge of France, even though he had never visited there before.

What can museum visitors expect to see and learn from this exhibition?

The exhibition will tell the story of Truman’s enlistment, training and combat in World War I, but it will also focus on the experiences he had that helped mold him into a leader. While he never envisioned being president, many of the lessons he learned in the war prepared him for the challenges that he would later face as president.

Visitors will also see the personal side of Harry Truman though the letters he wrote to his fiancee Bess Wallace and to his sister and mother. They were never far from his thoughts, and through his letters he clearly missed them as he relayed as much news from the front as he dared to, given the censorship of mail. The exhibition also includes stories of life back on the home front through artifacts and photographs illustrating what Bess did to contribute to the war effort while Harry was serving in Europe. Visitors will also meet a number of the men from Battery D who met Truman at the beginning of the war and, in some cases, remained his close colleagues and friends throughout his life.

What are a few of your favorite artifacts that will be displayed in this exhibition?

The exhibition includes many objects of a personal nature, such as Truman’s sewing kit and a chipped lens from his eyeglasses which, he explained in a letter, he kept as a spare after he had a new set of eyeglasses made prior to his departure to France. There is a portable barber chair and set of clippers used by Frank Spina, who was a Battery D barber and would remain Truman’s barber for the rest of his life. The exhibition will feature the McClellan saddle that Truman used during the war. Having been a farmer, Truman was a skilled horseman who impressed many other soldiers of Battery D. Truman’s tack box is particularly interesting because, prior to shipping off for France, he painted “Lieutenant Harry S. Truman” on it as identification. Once he got to France he learned that he had been promoted to captain, so he painted directly over the existing name – “Captain Harry S. Truman.”

Although the exhibition will focus almost exclusively on Harry Truman’s journey through the war, there will be several items on display that are of national significance. One is a ship’s manifest from the RMS Lusitania that was sunk by a German U-boat in 1915 with a loss of American lives. Another is what is called the Zimmerman Telegram, which was a coded 1917 German telegram that was intercepted and decoded by British intelligence and forwarded to American authorities. The telegram outlined a German proposal for Mexico to enter the war and in return be rewarded with the ceding of American territory in the Southwest back to Mexico following the German victory. The telegram caused an outrage in the United States about a month prior to the American entry into the war. A third piece of interest is a one-page letter written by President Woodrow Wilson following the end of the war. In response to a request to put an official name to the recently-ended war, Wilson suggested that it be called simply “The Great War.”

This article was originally published in TRU Magazine, the exclusive magazine that Truman Library Institute members receive several times a year as part of their membership. Become a member today to read more stories from the Special World War I Edition of TRU Magazine.

‘Heroes or Corpses’: Captain Truman in World War I opens to the public March 10, with an exclusive advance opening for Truman Library Institute members March 8 from 5:30 to 7 p.m. The exhibition runs through the end of the year and is included in museum admission.