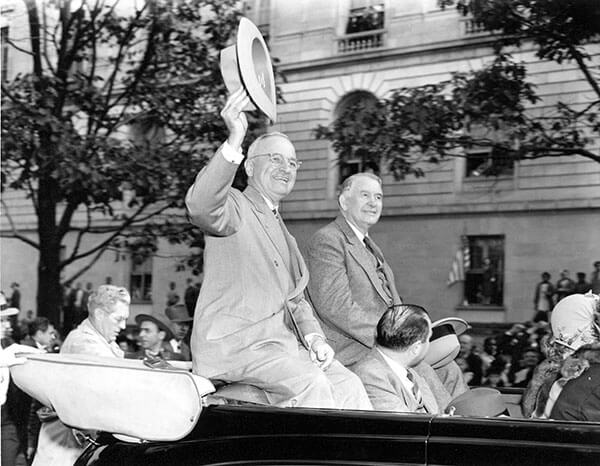 On November 1, 1948, Harry Truman was home in Independence, awaiting the presidential election the following day after the exhaustion of his Whistle Stop campaign. He addressed the people one more time, this time in his hometown, in the speech below:

I want to thank Senator Barkley for his generous introduction, and to say what I have said before — that no candidate for President ever had a finer running mate. The people of this country are everlastingly in his debt for his leadership in their interest. Senator Barkley will go down in history as one of our greatest public servants.

During the past two months the Senator and I have been going up and down the country, telling the people what the Democratic Party stands for in government. I have talked in great cities, in State capitals, in county seats, in crossroad villages and country towns.

Everywhere the people showed great interest. They came out by the millions. They wanted to know what the issues were in this campaign, and I told them what was in my mind and in my heart.

I explained the meaning of the Democratic Party platform. I told them that I intend to carry it out if they will give me a Democratic Congress to help.

From the bottom of my heart I thank the people of the United States for their cordiality to me and for their interest in the affairs of this great Nation and of the world. I trust the people, because when they know the facts, they do the right thing. I have tried to tell them the facts and explain the issues.

Tonight I am at my home here in Independence — Independence, Mo. — with Mrs. Truman and Margaret. We are here to vote tomorrow as citizens of this Republic. I hope that all of you who are entitled to vote will exercise that great privilege. When you vote, you are in control of your Government.

Your vote tomorrow is not just a vote for one man or another; it is a vote which will affect you and your families for years to come.

Now maybe you would like to know why I have made this fight for the people. I will try to tell you. It is a matter of the things I believe in.

I believe in a free America — strong and undivided.

I believe in the principles of the Declaration of Independence — that we the people shall govern ourselves through our elected representatives — that every man and woman has a right to an equal voice in the management of our Nation’s affairs.

I believe that the Constitution, which rightly protects property, is still more deeply pledged to protect human rights.

I believe, in particular, in the industrial workers, the farmers, and the small businessmen of this country. I believe they can best protect themselves against reaction and against inflation through the Democratic Party.

I believe that a Democratic administration, pledged to continue the present policies of our country, is our best insurance against going back to the dark days of 1932.

I believe with all my heart and soul that Almighty God has intended the United States of America to lead the world to peace. We were in that position 30 years ago. We failed to meet our obligation then, and World War II was the result.

This time we must live up to our opportunity to establish a permanent peace for the greatest age in human history.

We have two great goals — one to build a secure life for ourselves here at home, and the other to build a lasting peace for the world.

As you mark your ballots tomorrow, I want every housewife to ask herself: Will this protect my home and my children for the future?

I want every husband to ask himself: Is this best for my wife and family?

I want all voters to ask themselves: Is this the best way to insure a free and prosperous country?

And now, my fellow citizens, the future welfare of our country is in your hands. I have told you the truth as God has given me wisdom to see the truth.

Go to the polls tomorrow and vote your convictions, your hopes, and your faith — your faith in the future of a nation that under God can lead the world to freedom and to peace.

Truman shocked the world when he won the 1948 presidential election the next day, earning 303 Electoral College votes to Thomas E. Dewey’s 189.

Learn more about Truman’s harrowing 1948 campaign and his years in the presidency at the Harry S. Truman Library and Museum. Plan your visit today.

This story originally appeared in the 1948 Commemorative Issue of TRU Magazine, a magazine delivered free to Truman Library Institute members.