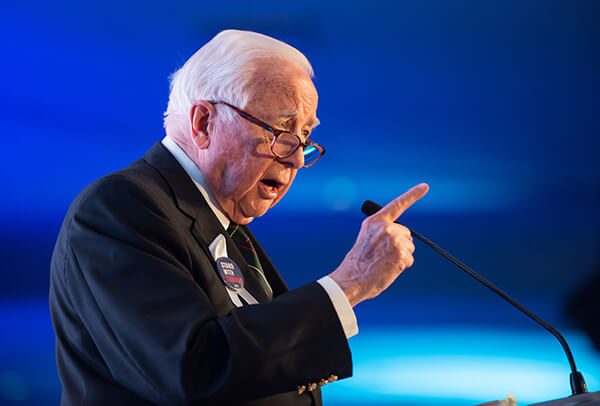 An Evening With David McCullough

More than 850 passionate Harry Truman fans packed into the Muehlebach Hotel on April 19, 2018, for the 19th annual Wild About Harry, featuring honored guest David McCullough. The Pulitzer Prize-winning author of the definitive biography Truman was honored that evening with the Harry S. Truman Legacy of Leadership Award then gave the following remarks. We are honored to share an excerpt from his speech:

Good evening and thank you very, very much. I feel back home again. I feel the feeling that I have in general that we are a good people, we are a good country, we are good citizens, we care about the future, and we care about the past. And to have so much of that feeling, a projection of that attitude all in one room is heartening in the extreme. And what a proud moment to have an award presented by Harry Truman’s grandson.

History is about people. History is human. In the course of human events, there’s a saying, “Gone but not forgotten.” My very strong feeling is if they’re not forgotten, they’re not gone. And as long as we don’t forget people like Harry Truman and what they stood for … we’ll be on track. We will be continuing with the American mission.

I grew up in a traditionally Republican family in Pittsburgh. At 15, in 1948, I was a junior in high school and I was very interested in politics and the election of 1948. I tried to stay awake to hear the outcome. I don’t think the word came through until about two in the morning, and I was too tired. I fell asleep. The next morning I got up and my father was shaving, and I went to him and said, “Dad! Dad! Who won?” He said, “Truman.” Like it was the end of the world.

About 25 or 30 years later, I was back home, and after dinner we sat down for a chat. He started in, as he often did when I was growing up, saying that the country was going to hell, the world was going to hell. Then he paused and said, “Too bad old Harry isn’t still in the White House.” Like many of you, I find myself thinking that more and more every day.

Imagine a man of character, a man of integrity, a man who spoke the truth, a man who didn’t dodge the draft and went to serve beyond the age that was required, and a man who was traditionally American. I loved it when he said, “I tried never to forget who I was, where I came from, and where I would go back to.” He knew where his origins were. He knew where his strength came from …

The kind of book that I write is really a joint effort. When I came out here for the first time to begin looking into the story of Harry Truman and I met some of the wonderful people over at the Truman Library, I realized almost instantly what an important part they were going to play in my work. If you look at the acknowledgement section in my Truman book, it goes on in very small type for pages because that many people helped. I interviewed over 125 people still living who had taken part in his administration or in his life and then the marvelous people at the Library who were so infinitely helpful over 10 years of work. Had I known it was going to take 10 years, I never would have done it. No, I really would not have. I didn’t know what I was getting into. I didn’t know the depth of those woods and how much work I had to do.

Looking back on my work, I realize the degree to which over and over I’ve been writing about people who faced severe, unpredictable adversity but who came through it because they would not give up. George Washington in the Revolutionary War. Washington Roebling building the Brooklyn Bridge. On and on, they would not give up and that’s character. Harry Truman had strength of character. Oh, how we need that …

I want to say here and now that there has never been a decision made under this man’s administration affecting policies beyond our shores that has not been in the best interest of this country. It’s not the courage of his decisions that will live but the integrity of the man. We need that. We need to be reminded of that. We need to teach that in our schools, talk about it at the dinner table with our children and grandchildren. We need to be reminded of what we stand for. And I feel very strongly that the Truman Library isn’t just for Independence, Missouri, isn’t just for Kansas, isn’t just for Missouri; isn’t just for the memory of Harry Truman; it’s for the betterment and the good of our country. When we give to the Truman Library, when we give to the increased influence and importance of this great institution, we are doing our part for the country in a way that I think will have direct effect…

Harry Truman is a great American story. There were great men; great speakers; great, eloquent and moving leaders; and tragic leaders, martyrs, if you will; but this is a life that’s admirable right through his retirement years …

The time I spent doing research on Truman just flew … When I graduated from college, I had no idea that I wanted to write history or biography. It never occurred to me. I thought about being a writer. I thought a lot about being a writer, and I tried to learn to be a writer all the way through grade school, high school and college. I was an English major — I wasn’t a history major. But I happened to find some photographs at the Library of Congress when I was working with the Kennedy people that started me on my first book, which was about the Johnstown Flood. And once I started research and doing interviews and writing about things that really happened and people who really were, I knew this is what I wanted to do all my life.

When I finished my book on Theodore Roosevelt, Mornings on Horseback, I met with my editor and my publisher and my agent to discuss what would be next. My editor, Michael Korda, said “You know, you’ve just finished doing Theodore Roosevelt. There’s no good one-volume biography of Franklin Roosevelt.” And there wasn’t at that point. And I said, “No, no. I’ve been with the Roosevelts now for four years. I think that’s enough.” I said, “If I were ever gonna write a book about a 20th century president, it wouldn’t be FDR. It would be Harry Truman.”

I have no idea why I said that … It just came out of me, and all three of them around the table said, “That would be great. Oh, yeah. Harry Truman would be.”  I said, “Wait a minute…” they wanted to sign me right up. I said, “Wait a minute. Let me find out if Margaret will cooperate,” which it turned out she was very willing. “And let me go out to Kansas City, to Independence, to the Truman Library and see what’s there,” which I did. And when I saw what was there, what is there, I knew I hit a goldmine of material, like nothing I’d ever encountered before. But I come back again to the point that I couldn’t have done it without the help of those people. I’m very aware of how important the staff of that Library is to anyone who comes to do research, whether it’s a student or a writer or anyone, and we must never underestimate the importance of that.

I want to thank all of you for taking pride in and taking a part in the institutions of your community, including the Truman Library. It’s important and it will have a long-reaching effect…

This story originally appeared in the 1948 Commemorative Issue of TRU Magazine, a magazine delivered free to Truman Library Institute members.