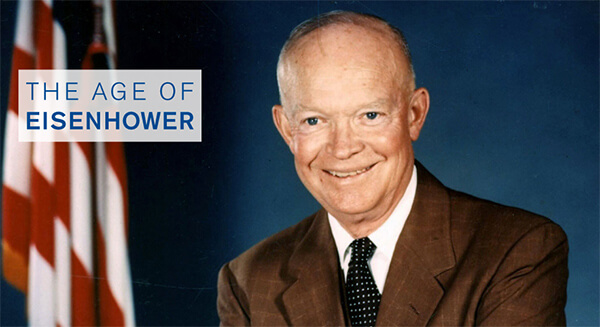 The Age of Eisenhower

Harry S. Truman and Dwight D. Eisenhower may not have always seen eye to eye, but one thing they had in common was that their experience in war shaped the presidents they would become. On Wednesday, June 6, the 74th anniversary of D-Day, author Dr. William I. Hitchcock will speak at a free public program focusing on how Eisenhower’s accomplished military career prepared him for serving as Commander in Chief through the Cold War. In his latest book The Age of Eisenhower: America and the World in the 1950s, Dr. Hitchcock explores the political climate of the 1950s and how President Eisenhower rose to become a leader on the world stage while guiding the U.S. through the middle of the 20th century. Dr. Hitchcock is a professor of history at the University of Virginia and the Randolph Compton Professor at the Miller Center for Public Affairs. A graduate of Kenyon College and Yale University, he is the author most recently of The Bitter Road to Freedom: The Human Cost of Allied Victory in World War II Europe, which was a finalist for the Pulitzer Prize.

We spoke with the Dr. Hitchcock to ask him a few questions previewing his public program:

What drew you to focus on Eisenhower?
In 2008 I published The Bitter Road to Freedom, a study of the liberation of Europe in 1944-45. It told the story of many people caught up in the difficulties of the war and its aftermath. Eisenhower, as the commanding general of allied forces in Europe, confronted a huge humanitarian crisis that he was not prepared to handle. But I found he faced these problems with efficiency and decency. His leadership style began to interest me, and so I settled on exploring his role as the 34th president of the United States.

You will be speaking on the 74th anniversary of D-Day. How did Eisenhower’s experience as Supreme Allied Commander during Operation Overlord shape his presidency?
Above all, it made him aware of the terrible cost of war. He spoke about the tragedy of war often, the loss of life, the young men cut down in their prime. He hated war, and was determined to avoid any conflicts as president. Facing the Soviet Union in the Cold War, he had to develop a strategy to keep the Cold War “cold” and never allow the world to be engulfed by war again. That effort defined his presidency.

How did Eisenhower’s approach to the world differ from Truman’s?
Eisenhower built upon the foundation Truman laid. Both men agreed on the importance of NATO, the Marshall Plan, the role of allies, and the serious threat posed by the USSR. Eisenhower, however, as a former general, had a somewhat better grasp of the strategic dimension of the Cold War. He wanted to avoid wars like Korea while also building a huge peacetime nuclear deterrent to contain the Soviets. He placed great emphasis on the need for a permanent warfare state to deter America’s enemies. That kept American out of war in the 1950s, though it also contributed to the nuclear arms race.

What should leaders today learn from postwar presidents like Eisenhower and Truman?
Above all, a successful president must have clear goals, determination to achieve them, and be surrounded by talented colleagues who can help carry their agenda into operation. Truman was more partisan than Ike, and that hurt Truman’s legislative agenda at times. Working to build a coalition across party lines is something Eisenhower attempted and had some success doing. But above all, both men carried themselves with dignity and believed that they represented the common American—because they had both come up from humble backgrounds in the Midwest. They always knew who they were and where they came from, and that gave them a firm moral compass.

Join us Wednesday, June 6, for “The Age of Eisenhower,” featuring Dr. William I. Hitchcock. The program takes place at 6:30 p.m. at the Harry S. Truman Library and Museum, with a free reception preceding at 6 p.m. This event is free but RSVPs are requested.