The Faith of a First Lady: Eleanor Roosevelt’s Spirituality | December 6, 2017 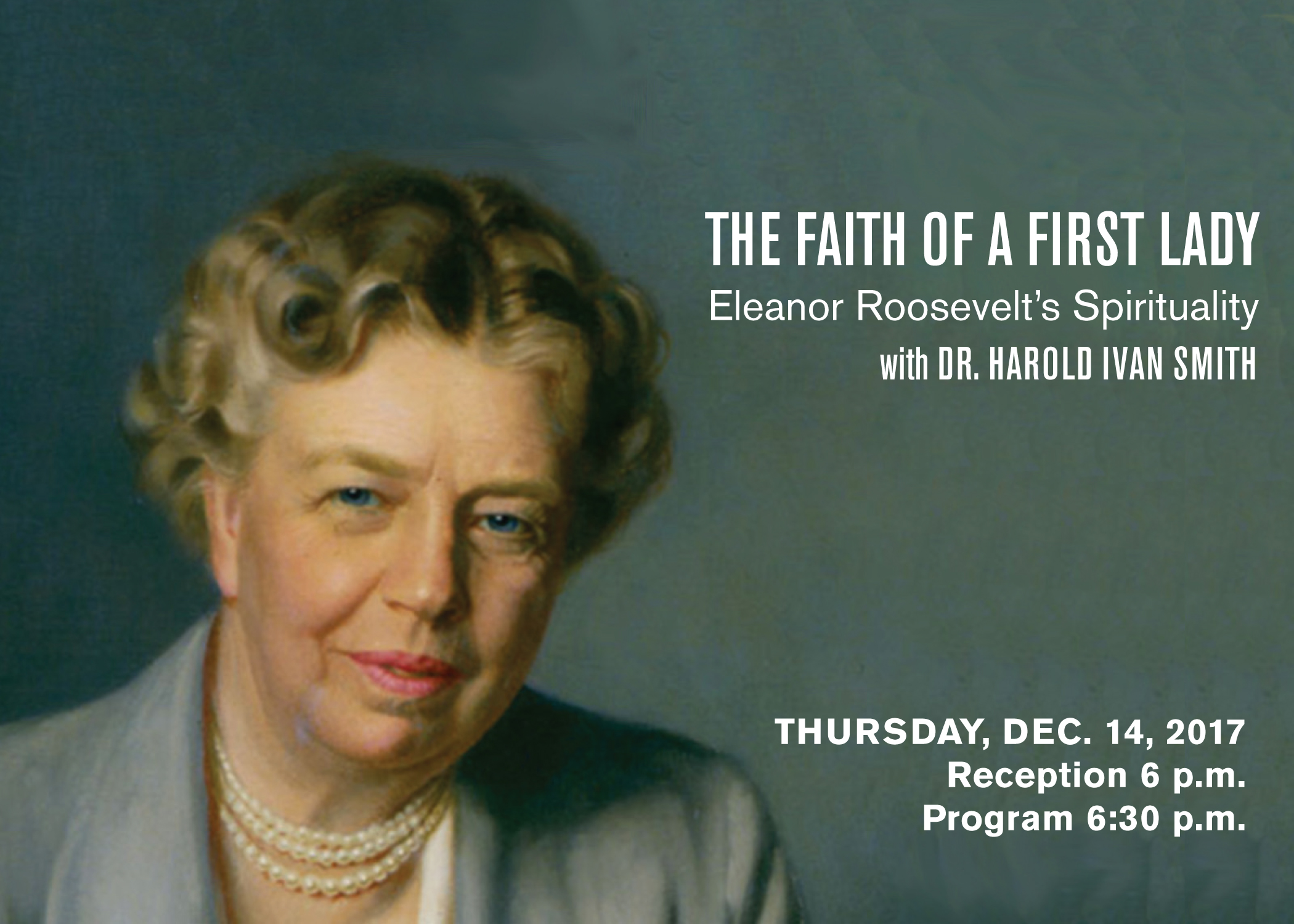 “One’s philosophy is not best expressed in words; it is expressed in the choices one makes … and the choices we make are ultimately our responsibility,” Eleanor Roosevelt once wrote. Throughout her monumental life, Roosevelt made choices that shaped the person she is remembered as today. She was a beloved first lady and a tireless social activist, but she was also a woman of great faith. Her beliefs and convictions fueled her passion to work for reform and advocate for civil rights, women’s rights and the rights of marginalized people around the world.

In Eleanor: A Spiritual Biography, local author Dr. Harold Ivan Smith provides a portrait of the legendary Eleanor Roosevelt and the spirituality that shaped her decisions as first lady and eventually as Harry S. Truman’s delegate to the United Nations General Assembly. Roosevelt survived a traumatic childhood that included the deaths of both of her parents, became first lady in a time of turmoil and helped the nation through a world war. Even after her husband’s death, she continued in public service and as a lifelong friend of Truman. Dr. Smith’s latest book provides an inspirational look into Roosevelt’s life offers a new angle on her life and legacy.

Next week we are partnering with the Harry S. Truman Library and Museum to host a free public program with Dr. Smith, and we spoke with the author in advance to ask him a few questions previewing his public program:

What drew you to focus on Eleanor Roosevelt?

As a thanatologist (a death, dying and bereavement specialist) I was fascinated with how loss shaped the lives of well-known historic personalities. Eleanor Roosevelt was off the chart with two major deaths in her life. I presented a paper on this early research at the annual meeting of the Association for Death Education and Counseling.

The question surfaced as to what I would do with my findings. So, I started trekking to Hyde Park, New York, to the Franklin Delano Roosevelt Presidential Library to do research for a book. At some point, Robert Clark, the Archivist, talked to me about changing the focus of the project to her spirituality. I replied that I was already committed to the death book, but Clark insisted, “You can always do that book, but no one has focused on her spirituality. And, since you have a doctorate in that field, you should tackle it.” For several weeks I wavered before concluding that I should “listen” to the official archivist.

I did not, however, realize the project would take ten years!

Tell us about Eleanor Roosevelt’s faith.

Eleanor was a faithful, cradle member of the Episcopal Church; Franklin was nominal. Before polio, Sundays in good weather were much too valuable to be spent in church. Eleanor took great grief from her children for insisting they go to church when their father did not go!

Eleanor had something of an encyclopedic memory of the New Testament—large portions of which she had memorized in French (her first language). Her spirituality was anchored in two “bookends”: First, the Hebrew prophet Micah’s question, “What does the Lord require of you?” Answer: “To love justice, to act mercifully, and to walk humbly with one’s God.” The second bookend was Jesus’ declaration: “Whatever you have done to the least of these, my brethren, you have done unto me!” To Eleanor, it did not require genius to determine “least of these” in any setting. She also found great meaning in the Beatitudes and in Jesus’ Sermon on the Mount.

Eleanor found a spiritual “home base” in Saint James’ Parish in Hyde Park. She particularly cherished the Eucharist because she felt that when she knelt at the altar she was not Mrs. Roosevelt, first lady, or UN delegate, but just another Christian. And midnight Christmas Eve worship was an important event, but, as first lady, only after she had distributed gifts and food in the alleys of Washington’s slums.

Eleanor repeatedly said that it was not a question of what one believed — a position she shared with Harry Truman — but how one lived one’s beliefs.

Finally, Eleanor was very public about her faith. In hundreds of “My Day” and “If You Ask Me” columns, she addressed issues of faith, prayer and the Bible. If one wants to know what made Eleanor “tick,” you have to weigh her deep faith and spirituality.

How did Eleanor Roosevelt’s spirituality affect her leadership and decision-making?

On issues of immigrants and refugees, Eleanor treasured the birth narrative of Jesus — that he was born to poor parents and was an immigrant — an immigrant whose life was threatened.

Her service at the United Nations stretched her understanding of other faiths. Early she predicted that the United States would have to engage and understand the Muslim faith. Her spirituality drove her conviction (in the Universal Declaration of Human Rights) that everyone had a right to worship their own way and had the right to change their religious beliefs, affiliations and practices.

How did Harry Truman work with Eleanor Roosevelt as delegate to the United Nations General Assembly and former first lady?

The launching of the United Nations was a complicated process, beginning with the organizing meeting in San Francisco, which erupted in tension between the Americans and the Russians. In thinking about the composition of a delegation, Truman selected diplomatic heavyweights. And he chose Mrs. Roosevelt.

Some think Truman realized that having a “Roosevelt” visible at the meetings would help delegates recall FDR’s great dream. Of course, others interpret the data to suggest that Truman was getting Eleanor out of the country (and out of his hair).

Initially, Eleanor was dumbfounded, retorting that she knew nothing about international law and had an estate to settle (given FDR, a most complicated estate). She thought Truman raising her appointment to be another indication that he was “in over his head.”

Fortunately for the world, Malvina Thompson, Eleanor’s secretary, cautioned, “Mrs. Roosevelt, I believe I would be hesitant to say ‘No’ to the president of the United States.” Eleanor accepted the appointment and sailed for London in January 1946.

The alpha males on the delegation were less than pleased by Eleanor’s appointment. They schemed, “Where can we put her so she will not be in the way?” They appointed her to Committee Three — dealing with human rights — knowing that nothing would be accomplished there. Wrong! At the first meeting, Eleanor was appointed chair and set a goal of drafting a Universal Declaration of Human Rights — despite 1,001 Russian objections.

Truman and Mrs. Roosevelt’s relationship was a “give-and-get.” She told him what she thought; he appreciated her candor. There were times when he was frustrated with her or, more so, with her three wannabe politician sons, but Truman fully backed her during her public dust-up with Cardinal Spellman over federal funding of parochial schools. He delighted, at her funeral, in reminding Dwight Eisenhower that while he had ignored Eleanor’s service, he had made her “First Lady of the World.”

Join us Thursday, Dec. 14, for  “The Faith of a First Lady: Eleanor Roosevelt’s Spirituality” featuring Dr. Harold Ivan Smith. The program takes place at 6:30 p.m. at the Harry S. Truman Library and Museum, with a free reception preceding at 6 p.m. This event is free but RSVPs are requested.

RSVP FOR THIS EVENT