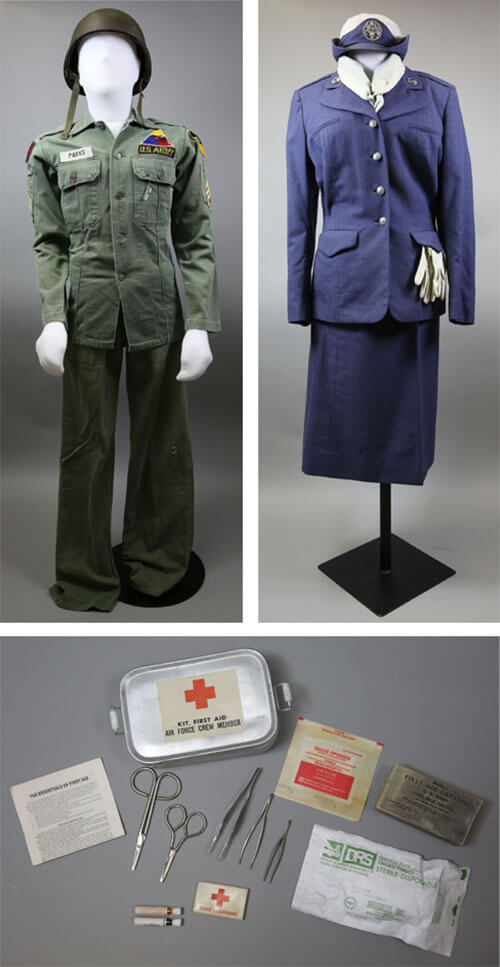 Natalie Walker is Museum / Archives Technician at the Truman Library Institute and is currently finishing a Master’s in Public History at Colorado State University. In December of 2017, the Harry S. Truman Library and Museum acquired the entire archival and museum collection belonging to the now defunct National Korean War Museum (NKWM) in Illinois.

A Mayflower truck arrived at the Library on a cold morning with nearly 10,000 pounds of material haphazardly stored in cardboard boxes, plastic totes, and garment boxes. Archives and museum staff helped offload the truck and stack the hundreds of boxes in empty offices in the Library. Two rooms filled from wall to wall served as the temporary location for the material and would eventually become the initial processing areas for the artifacts and documents as well.

With a deadline to have the rooms emptied by late May of 2018, Museum Technician Stephanie Rohr and I began sorting through the boxes, under the supervision of Archivist David Clark. We quickly learned that a tote carrying archival material might also contain a wadded up pair of olive drab army pants, air force uniform ties or a pair of field glasses. With each box opened, we uttered gasps of surprise, excitement, or sighs of confusion. Why would priceless photographs of the wartime experience be loosely thrown at the bottom of a box with decommissioned grenades and spent shell rounds? Stephanie and I later referred to this initial processing experience as the “chaos” stage.

Wielding sharpies and box cutters, we began sorting through each box, making note of potentially interesting artifacts on the outside of the boxes. We simultaneously separated archival material from the artifacts. After a couple of days spent evaluating the artifacts in the first room and feeling like we had made little progress, Stephanie and I decided to refine our processing procedure. We returned to the room with notepads and began labeling the boxes with numbers and then recording the box number and all of its contents in the notepad. This process took longer, but it allowed us to have a better grasp on the collection as well as the accessioning process of the NKWM.

Most of the artifacts consisted of uniforms from every branch of the military and other related artifacts like mess kits, field glasses, walkie-talkies, c-rations, entrenching tools, dog tags and can openers. Mixed in with these artifacts were Korean items such as kimonos, slippers and brass cutlery, most of which the NKWM staff purchased from retail websites to dress out their exhibits on Korean culture and life. Stephanie and I immediately rejected most of these items noting that they were not authentic to the time period, and in many ways, emphasized ethnocentric stereotypes of Korean culture.

Additionally, a significant portion of the collection was comprised of Korean War veteran material. Artifacts and archival material included photos of reunions, coffee mugs, shot glasses, caps and commemorative medals. Naturally, these items were not considered for accessioning as they focused on commemorating rather than exploring the wartime experience.