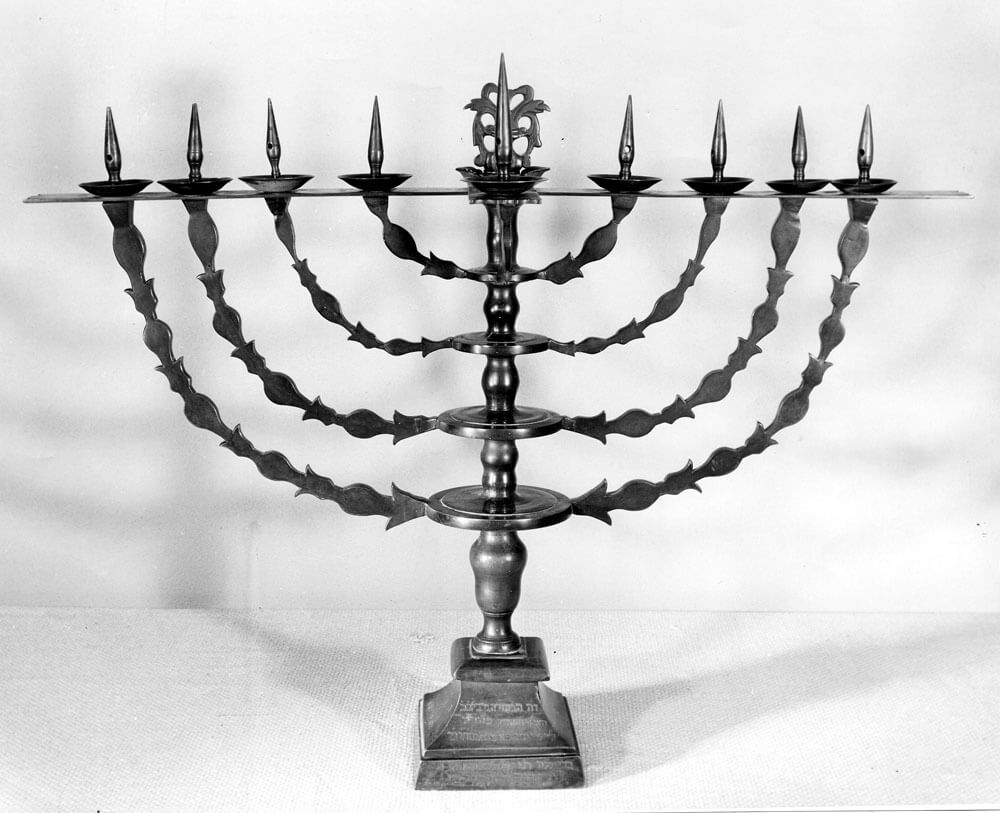 Hanukkah at The White House

Among the gifts from heads of state that are in the holdings of the Harry S. Truman Presidential Library and Museum is a menorah presented to President Truman by Israel’s first Prime Minister, David Ben-Gurion. The menorah dates back to at least 1767, when it was donated to a synagogue in Buergel, Germany.

The menorah was used in the synagogue until 1913, when it was found broken in pieces. A man by the name of Siegfried Guggenheim asked for the broken pieces and provided a replacement. The Guggenheim family restored the old menorah for their personal use, and brought it to the United States when they immigrated in the 1930s. Eventually, the menorah was acquired by the Jewish Museum in New York.

Throughout his Presidency, Ronald Reagan received a menorah in the Oval Office to mark the lighting of the menorah on the Ellipse. George Bush invited children to light candles at the Old Executive Building adjacent to the White House. William J. Clinton and Hillary Rodham Clinton continued this tradition by hosting Hanukkah gatherings in the Oval Office with children from local schools and synagogues.

Former President George W. Bush and Laura Bush initiated a new tradition in 2001, when the Hanukkah menorah was lit for the first time in the White House Residence. Over the next seven years, the President and First Lady participated in Menorah Lighting Ceremonies in the East Wing, the Grand Foyer, and different parts of the White House.

In 2008, the tradition came full circle when the menorah that was given to Harry S. Truman from David Ben-Gurion returned to the White House to be lit in a Hanukkah ceremony. Clifton Truman Daniel, grandson of President Truman, and Yariv Ben-Eliezer, grandson of Prime Minister Ben-Guiron, participated in the lighting. The George W. Bush Administration borrowed the menorah from the Harry S. Truman Presidential Library and Museum, where it is currently on exhibit.

President and Mrs. Barack Obama have continued the tradition of hosting Hanukkah celebrations at the White House, including candle lighting ceremonies and receptions.

In honor of the Festival of Lights that is currently in progress, here is a gallery of Presidential Hanukkah celebrations and menorahs from the holdings of the Presidential Libraries of the National Archives.

This White House blog post was contributed by Susan K. Donius, Director of the Office of Presidential Libraries at the National Archives and Records Administration.