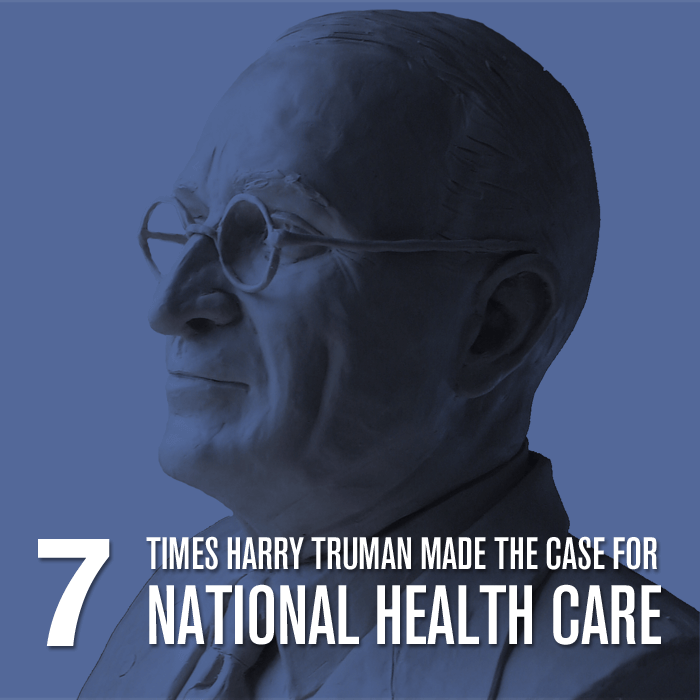 7 Times Truman Made the Case for National Health Care

Special Message to the Congress Recommending a Comprehensive Health Program “Our new Economic Bill of Rights should mean health security for all, regardless of residence, station, or race–everywhere in the United States.

By preventing illness, by assuring access to needed community and personal health services, by promoting medical research, and by protecting our people against the loss caused by sickness, we shall strengthen our national health, our national defense, and our economic productivity. We shall increase the professional and economic opportunities of our physicians, dentists and nurses. We shall increase the effectiveness of our hospitals and public health agencies. We shall bring new security to our people.”

Tweet: “The health of this Nation is a national concern.” – Harry S. Truman, http://bit.ly/2uibQt3 via @TrumanLibInst

Special Message to the Congress on Health and Disability Insurance “Healthy citizens constitute our greatest national resource. In time of peace, as in time of war, our ultimate strength stems from the vigor of our people. The welfare and security of our nation demand that the opportunity for good health be made available to all, regardless of residence, race or economic status.

At no time can we afford to lose the productive energies and capacities of millions of our citizens. Nor can we permit our children to grow up without a fair chance of survival and a fair chance for a healthy life. We must not permit our rural families to suffer for lack of physicians, dentists, nurses and hospitals. We must not reserve a chance for good health and a long productive life to the well-to-do alone. A great and free nation should bring good health care within the reach of all its people.”

Tweet: “A great and free nation should bring good health care within the reach of all.” – Harry S. Truman, http://bit.ly/2uibQt3 via @TrumanLibInst “Every year—now listen to this—every year, more than 325,000 Americans die who could have been saved if they had had the right kind of medical attention and care that we know how to provide.

Only 20 percent–one-fifth of our population is able to afford the medical care they need. Now that means that there are 110 million people in this country who can’t afford proper medical attention. That is a disgrace to the richest country in the world.

The United States loses $27 billion a year in national wealth through sickness and disability alone.

These facts should make every one of us resolve to do all that we can to improve our medical facilities. I think these facts point to the need for the national health program that I have been urging the Congress to adopt.”

Tweet: “(Our health care) is a disgrace to the richest country in the world.” – Harry S. Truman, http://bit.ly/2uibQt3 via @TrumanLibInst

Special Message to the Congress on the Nation’s Health Needs “Good health is the foundation of a nation’s strength. It is also the foundation upon which a better standard of living can be built for individuals. To see that our people actually enjoy the good health that medical science knows how to provide is one of the great challenges to our democracy….

Many people are concerned about the cost of a national health program. The truth is that it will save a great deal more than it costs. We are already paying about four per cent of our national income for health care. More and better care can be obtained for this same amount of money under the program I am recommending. Furthermore, we can and should invest additional amounts in an adequate health program-for the additional investment will more than pay for itself.

The real cost of our present inadequate medical care is not measured merely by doctors’ bills and hospital bills. The real cost to society is in unnecessary human suffering and the yearly loss of hundreds of millions of productive working days. To the individual the real costs are the shattering of family budgets, the disruption of family life, the suffering and disabilities, the permanent physical impairments left by crippling diseases, and the deaths each year of tens of thousands of persons who might have lived. This is the price we are now paying for inadequate medical care.

It is plain common sense that we should not permit these needless costs to continue when we have it within our power to reduce them with a practical health program. Where there are differences remaining as to the details of the program, we should not permit these differences to stand in the way of our going forward. They should be threshed out with honesty and tolerance, as is our democratic fashion. We should enact the best possible program and then all of us should get behind it to make it work.

We are striving in this country to see that the strength and flexibility of our political and economic institutions are used to bring the greatest possible good to our people. I consider this health program as part of that endeavor–to adjust to modern conditions without losing traditional values, to bring to the people of this country the full enjoyment of the benefits which our freedom makes possible.”

Tweet: “All of us should get behind it to make it work.” – Harry Truman, http://bit.ly/2uibQt3 via @TrumanLibInst “I have long been interested in safeguarding and improving the health of our people. The provision of adequate health care for all of our population must be a matter of national, as well as local, concern. It is particularly important that in this day of world crisis we should seek to limit the drain upon our strength through illness and death…

I have repeatedly endorsed programs to solve [health care] problems. Our attempts to take constructive action on these issues have met enthusiastic support from some quarters and bitter opposition from others. As a result, our people are confused about the proper course of action on subjects so vitally important to their welfare. On a number of occasions I have stated that I would be happy to consider suggestions which were better than the measures I have endorsed to bring the continuing achievements of medical progress to all our people. But such counterproposals have not been forthcoming.”

Click to tweet: “(Health care) must be a matter of national, as well as local, concern.” – Harry S. Truman, http://bit.ly/2uibQt3 via @TrumanLibInst

Address in Philadelphia at the American Hospital Association Convention “All this doesn’t mean that there is nothing left to argue about. I expect we will go right on in the American way having differences of opinion about the part the Federal Government should play in helping to meet the health needs of our citizens. Now, personally, I have always understood that the Constitution of the United States imposes upon the Government of the United States a responsibility with respect to the general welfare of its citizens. And certainly no one can pretend that good health is not a matter of first importance so far as the general welfare is concerned.

That is why, ever since I have been President, I have recommended programs which I believe will provide better medical and health services for all our people. Some groups have received these proposals enthusiastically. Others have been strongly against them. That is what happens every time we try to move forward. We have to make each advance by overcoming the objections of those who want to pull back.

My only interest in this matter is better health for all our people. That is why I have constantly asked the “pullbacks” to come forward with plans of their own. But you know, it is a failing common to the “pullbacks”—they don’t want to move ahead at all, no matter how it’s done. They just want to stand still, with things as they are, or they even want to move backward…”

Click to tweet: “No one can pretend that good health is not a matter of first importance.” – Harry Truman, http://bit.ly/2uibQt3 via @TrumanLibInst

Address Before the Association of Military Surgeons “I have been sharply attacked and criticized for my insistence that the Federal Government do its full share in solving our health problems. But I do not mind being attacked. The main objective for me has been to get on with the job of improving the Nation’s health. And in that job we have made a lot of progress. We have made it in spite of politically inspired opposition–and this progress is a source of real satisfaction to me, I will tell you that. I believe the Federal Government has helped a great deal. I believe it could do even more. And I think it will do more as the facts become fully known, and our health problems are more widely understood.

This is not, for me at least, a matter of partisan politics. It is a matter of serving the general welfare of the country, and of using the most effective means for doing it.

The health of the American people is one of our basic national resources. It is as important to the welfare of our country as our land, our water, and our minerals. Our National Government has been concerned about the preservation and development of these resources for decades. It is just as logical, and just as important, for us to be concerned about health.”

Click to tweet: “The health of the American people is one of our basic national resources.” – Harry Truman, http://bit.ly/2uibQt3 via @TrumanLibInst

Join our email list to receive TRUhistory right in your inbox: