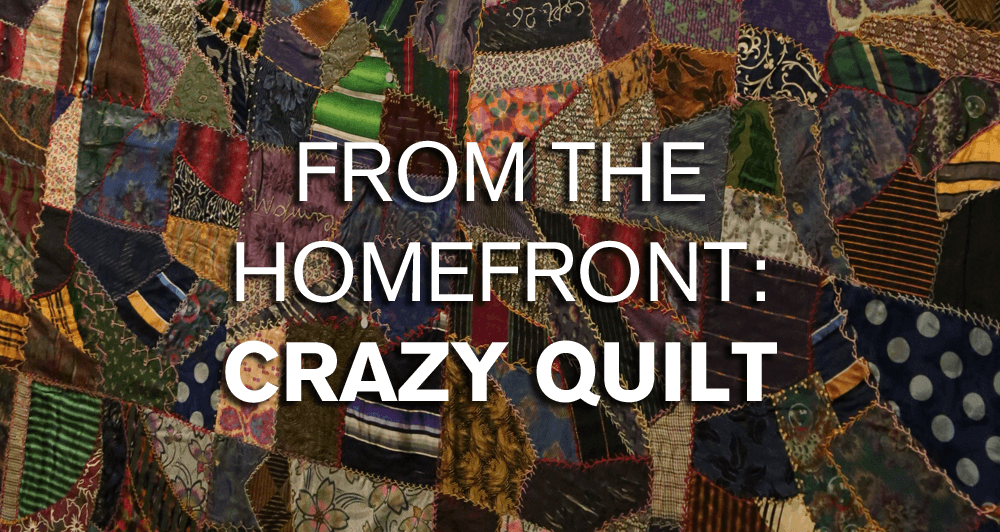 100 years ago, as Captain Harry S. Truman and the rest of the 129th Artillery were preparing to ship off to fight in the Western Front and face combat in World War I, the wives and sweethearts of the Battery D men were taking on a project of their own. These women banded together to create a quilt that was eventually raffled off to raise money to buy wool yarn, which would in turn be used to knit socks for the troops. This year only, this special quilt is on display in the Truman Library’s special exhibition, “Heroes or Corpses”: Captain Truman in World War I.

The quilt is a “crazy quilt” pattern, a style popular from the late 1870s to the 1910s. The process to create a crazy quilt would take hours, cutting shapes and trying different arrangements before sewing them into squares. Made predominately of silk, crazy quilts feature varied stitching styles and embroidered motifs that include animals, flowers, verses and family histories. This particular quilt includes motifs specific to the war and Battery D, including a doughboy, “CAMP DON” (short for Camp Doniphan in Fort Sill, OK, where Captain Truman and Battery D were stationed prior to being deployed overseas), “MISSOURI BOYS,” “1918” and more.

Before the quilt could be displayed in this new exhibition, it underwent a conservation process to remove wrinkles and prevent further deterioration. The Truman Library acquired the quilt in 1993, and since the quilt remained in storage since then, it had built up the wrinkles and creases inevitable of decades of storage.

Leila Harritt, textile conservator from the Nelson-Atkins Museum of Art, led the process to do minor conservation work and then guided the Truman Library team in the mounting procedure. She discovered that several of the silk squares in the quilt had frayed and deteriorated, which is a common problem crazy style quilts face. Harritt used fine mesh netting to secure those loose threads to prevent further unraveling along with glass blocks and dampened blotter cards to press the creases and wrinkles. The entire process took four days before the quilt could be mounted.

The quilt is considered unfinished in that it does not have batting or a lower layer of material, which presented a problem for the team when it came time to display the quilt due to its overall fragility. Chris Holle, a retired exhibit specialist from the Nelson-Atkins Museum of Art, came to help prepare the quilt to be mounted. He used a metal-backed board that had pre-drilled holes that allowed the quilt to be attached with small magnets, meaning the quilt could be displayed vertically in the new exhibition for visitors to enjoy this year.

The “Heroes or Corpses” exhibition is on display through the end of the year and tells the story of Captain Truman’s service in World War I and how this experience set him on the path toward the presidency. Plan your visit today to view this unique quilt along with many of Truman’s personal belongings from his soldier years.