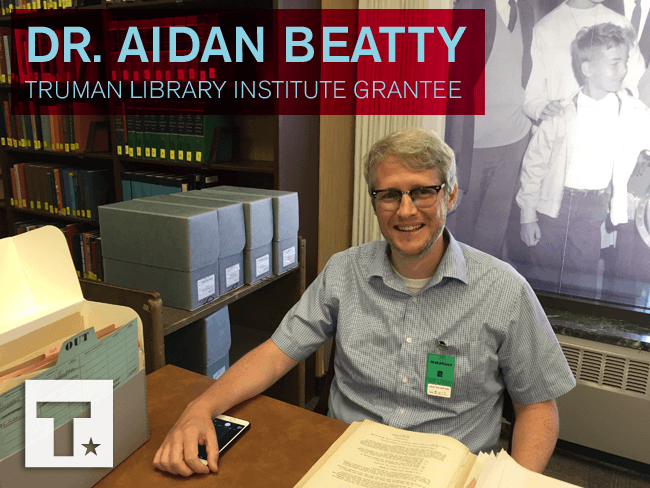 Meet one of these grantees, Dr. Aidan Beatty, who recently traveled to the Truman Library from Ireland to study the intellectual history of private property during the Truman era. We took a few minutes of Dr. Beatty’s time to learn about his research and what he learned while on site at the Truman Library.

Tell us a bit about your research project.

I’m writing a book about the intellectual history of private property, from Early Modern England to today. What I’m interested in is what various political philosophers and political actors imagine private property is, and how gender and race are at the centre of their imagination. So for instance, I look at John Locke and how he imagines the New World as an empty space, waiting to be taken over by English men and turned into large private estates. I look at Karl Marx and his writings on Ireland and how he imagines Ireland as a place where private property has not yet fully taken root. This leads Marx to a lot of very interesting assertions about Irish men being freer, more radical and maybe even more masculine than English men.

With Truman and the Truman Administration, I’m interested in the various utopian visions of what America would look like after the war, which various people in the Federal Housing Administration (FHA) engaged in. There was a lot of debate going on among senior members of the Truman Administration about large-scale government projects to subsidise housing for GIs coming back from Europe and Asia after 1945, about guaranteeing a home for all, and a lot of very idealised visions of the new suburban family homes to be built after the War.

I’m particularly interested in Raymond Foley, who had been the head of the FHA in Michigan and had been heavily involved in housing in Detroit in the late ‘30s and early ‘40s, and then became the national head of the FHA under Truman. Looking at Foley will hopefully also allow me to look forward to what comes after the Truman-era, when these FHA housing programmes led to “white flight” in places like Detroit and to analyse what happens when these idealised visions of American family housing were put into reality.

Why do you think it’s important to study Truman-era history?

In the Truman-era, the memory of the Great Depression was still quite strong and there was still a very strong suspicion of individualist politics and economics; the debates can seem very similar to current arguments over economics. Plus, the consequences of postwar housing policies are still very evident in America today. Americans are literally still living in the country that the Truman Administration built!

I have one very academic answer to this, and a very non-academic one.

The academic answer: I came across a lot of material produced by high-ranking figures within the FHA dealing with proposed housing programmes for African Americans. It’s very well known among historians that when programmes like the GI Bill and FHA-backed mortgages were made available, anti-Black racism undermined them hugely; Black GIs found it much harder to get mortgages. And yet, interestingly, the bureaucrats producing the reports and studies that underpinned these programmes never seem to acknowledge any of this. I haven’t quite figured out why, yet. But it almost seems like they don’t want to admit to themselves that their utopian vision of post-war America is crashing into a lot of harsh realities!

The non-academic answer: I was really surprised to see how many people wrote to the President offering their opinions on what should be done with housing in America, or on a whole lot of other issues too. Some of these letter-writers were architects, owners of construction companies and urban developers. Others were just private citizens with strong opinions. And a small few had some pretty crazy ideas about housing! Up to now, as a historian, I’ve mainly done research in British and Irish archives and some Israeli ones. I’d never seen something like this before; it’s really interesting to see how many Americans feel they have a right or even a duty to write to their President.

What did it mean to be awarded a Truman Library Institute Research grant?

My first book was on Irish and Jewish history and with this new book I’m doing something far more international, from Ireland, France and Britain to the US and West Africa. I’m very much pushing myself into areas that I have not been familiar with up to now. Getting the grant from the Truman Library Institute definitely helped me feel like I’m on the right track as I move more into American history-writing. Plus, the grant covered my flight and accommodation as well as renting a bike here. It was wonderful to cycle through Independence every morning and afternoon, going to and from the Library!

Thank you to the generous members and donors who have made it possible for Dr. Beatty to conduct his research! Are you interested in ensuring that important research like this continues? Donate today.