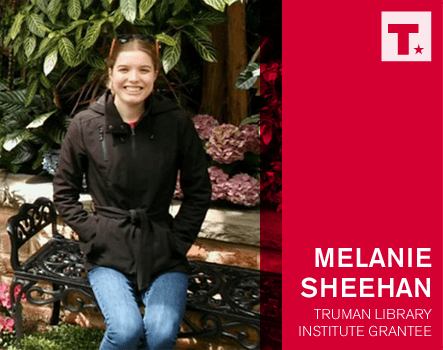 Meet one of these grantees, Melanie Sheehan, who recently traveled to the Truman Library from the University of North Carolina – Chapel Hill to research for her project focused on business and labor organizations in the international economy during the Truman and Eisenhower administrations. We took a few minutes of Melanie’s time to learn about her research and what she learned while on site at the Truman Library.

Tell us a bit about your research project.
My project explores how U.S. business and labor organizations operated in the international economy during the Truman and Eisenhower administrations. I am particularly interested in how private economic interests intersected with foreign policymakers’ Cold War aims to influence the global economy, with a focus on the effects of U.S. economic activities on international labor standards. Although I am currently directing my research towards the completion of a Master’s thesis, I am also beginning to consider ways to develop my project into a full doctoral dissertation.

Why do you think it’s important to study Truman-era history?
The Truman era witnessed major global transformations that had ramifications for the remainder of the twentieth century. The immediate postwar years saw the reconstruction of Western Europe, the breakdown of the U.S.-USSR wartime alliance, and the onset of decolonization. Domestically, too, the era witnessed major changes — growing demands for civil rights, deepening anticommunism and a new acceptance of liberal trade unionism — that shaped political and social change in the postwar period. A true understanding of the twentieth century thus demands a thorough exploration of the Truman era.

What is the coolest discovery (or discoveries) you found during your research at the Truman Library? What does that discovery mean to your research?
My coolest discovery was probably a handwritten letter written by a Romanian worker, addressed to the U.S. Consul, in 1951. I must admit I was a bit taken aback by it. It was such an unexpected find, and the handwritten nature of it made it feel more personal than the typed official documents I typically engage with.

The letter describes the worker’s frustration with Romania’s Communist leadership. He wrote that workers were “exploited and kept in misery.” Although he and other workers “want to react” to these conditions, they did not because they feared state retribution.

The document is important for my own research for two main reasons. First, it helps to develop a fuller understanding of the worldview of U.S. Labor Department officials. I found the letter in the papers of Philip M. Kaiser, who served as Truman’s Assistant Secretary of Labor in charge of International Affairs. Letters like this one affirmed Kaiser’s belief that capitalism better served the interests of workers than Communism. Such convictions helped foster his commitment to the development of non-Communist alternatives to Communist labor activism abroad. The other major element of this document that pertains to my research is the way it was used. Upon receiving the document, Kaiser requested permission from the State Department to publish it. The letter thus reveals the ways that U.S. government officials used comparative working conditions in capitalist and Communist countries for propagandistic ends.

What did it mean to be awarded a Truman Library Institute Research grant?
Being awarded a Truman Library Institute Research grant was really important for my research. Without funding, travel to the Library from the east coast would have been very difficult financially. Funding enabled me to spend a week in the archive, where I found a large amount of material that enabled me to make substantial progress on my project. I am therefore extremely grateful to have received a grant.

Thank you to the generous members and donors who have made it possible for researchers like Melanie to conduct their research! Are you interested in ensuring that important research like this continues? Donate today.