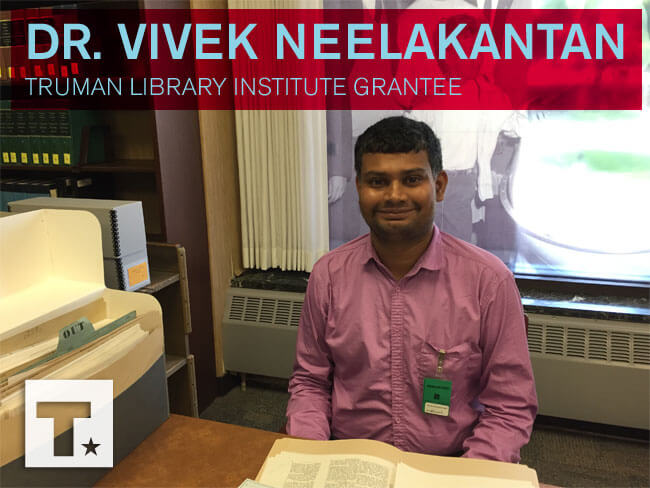 Meet one of these grantees, Vivek Neelakantan, Ph.D., Visiting Assistant Professor at Universitas Airlangga in Indonesia, who recently traveled to the Truman Library to study the mobilization of applied medical knowledge in Southeast Asia in the 1950s. We took a few minutes of Dr. Neelakantan’s time to learn about his research and what he learned while on site at the Truman Library.

Tell us a bit about your research project.
Since 1945, Southeast Asia has been a laboratory for technical assistance, funneled primarily through the U.N. and its specialized agencies. For the political leadership of the region, science provided the solution to national problems such as maximizing food productivity and the organization of healthcare. This project investigates from a comparative historical perspective as to how and why medicine became so central to postcolonial science and international aid in Southeast Asia, with specific reference to Indonesia and the Philippines.

Why do you think it’s important to study Truman-era history?
The Truman years (1945-52) are critical to understand the linkages between the dissolution of the British, French and American colonial empires in Southeast Asia, the onset of the Cold War tensions between the U.S. and the Soviet Union, and the enunciation of the Point Four Program (1949) – a comprehensive program of economic and technical assistance to developing nations – to curtail the spread of communist ideology.

What is the coolest discovery (or discoveries) you found during your research at the Truman Library? What does that discovery mean to your research?
The most exciting finding of my research at the Truman Library relates to the way the U.S. used the U.N. agencies, particularly the World Health Organization and the Food and Agricultural Organization as a conduit for providing technical assistance to developing countries, given the fact that the U.N. was considered as an apolitical agency and addressed the anxieties of newly-decolonized nations of Africa and Asia who did not want to be drawn into Cold War political alliances. Of specific interest to my research project were the John Sumner Papers. Allan Griffin’s address (in the John Sumner Papers) examines the rationale for U.S. intervention in Southeast Asia during the 1950s.

The Truman Library research was critical to helping me transcend the limitations imposed by nationalist historiography. For instance (a) for a nuanced understanding of the ways in which technical assistance had to negotiate the challenges of dissolution of Dutch, French, British and American colonial empires, and the emergence of new nation states in Southeast Asia; and, (b) the political capital derived by U.S. and the U.S.S.R. in administering technical assistance to newly-independent countries of Africa and Asia as a means of purchasing the political allegiances of the leaders of those countries. The week-long archival research, undertaken in August 2017, has laid the foundation for a new line of research on the history of postcolonial science in Indonesia and the Philippines (1950s).

What did it mean to be awarded a Truman Library Institute Research grant?
I am currently working on a book-length project on Postcolonial Science in Southeast Asia. As an historian of Southeast Asia, I can attest to the fact that archival materials across Southeast Asian nations are difficult to obtain given the disparate nature of source materials or have been destroyed as a result of regime change. The Truman Era coincides with the early 1950s, a period that was marked by fervent national reconstruction across Asia, and increased competition between the Soviet Union and the United States to purchase the loyalties of newly-independent countries of the region. Instead of examining Point Four and U.S. Technical Assistance as an instrument of US foreign policy during the Cold War, my project examines the uneven spread of modernization across Asia. For example, why were some post-war technologies more widely accepted than others? The Truman Library Institute’s generous grant made me aware of the limitations of nationalist historiography.

Thank you to the generous members and donors who have made it possible for researches like Vivek to conduct his research! Are you interested in ensuring that important research like this continues? Donate today.