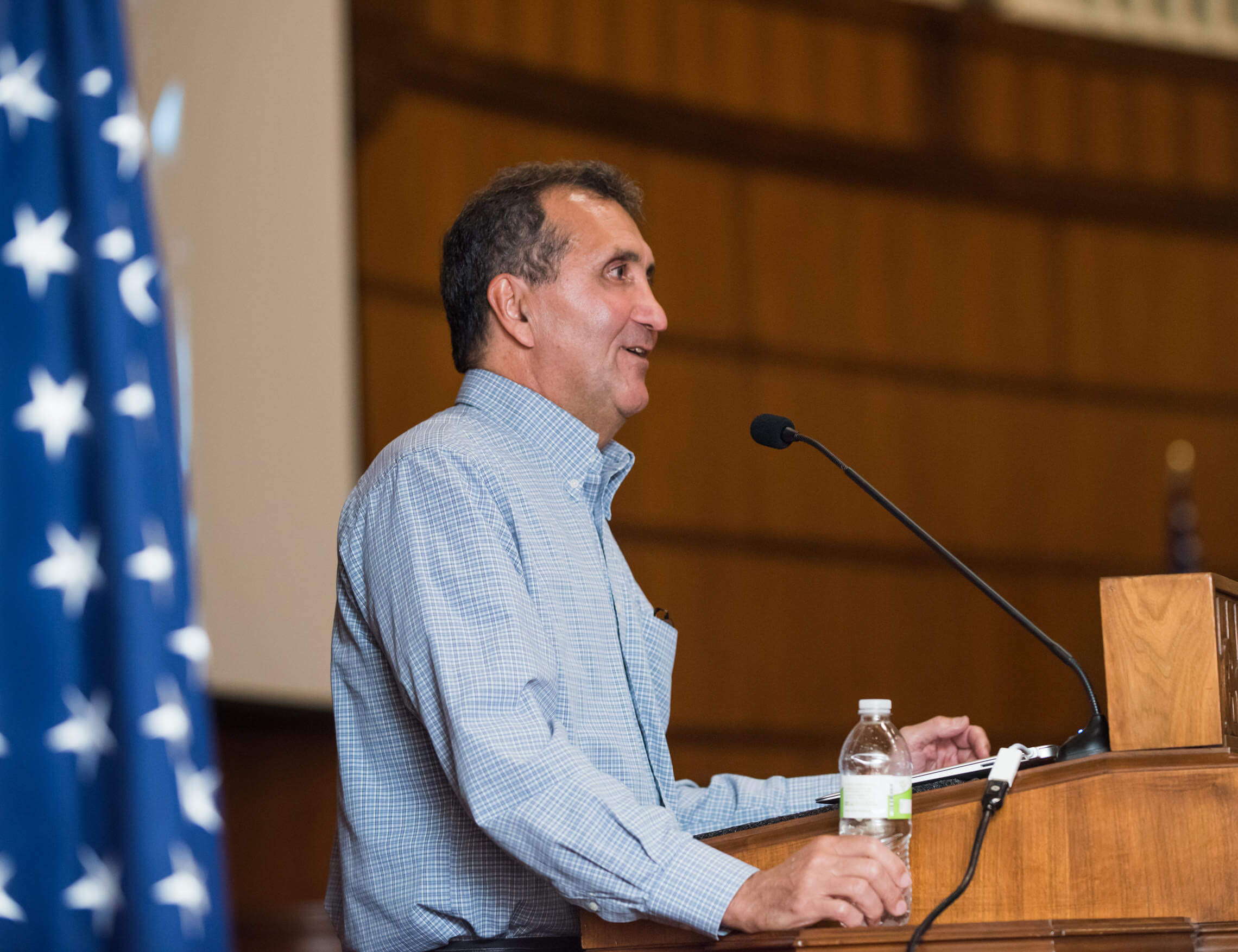 “Did they tell you President Obama was coming?” Pete Souza asked the crowd at Unity Temple last night, remarking on the fact that nearly 1,000 people had flocked into the auditorium to hear him speak.

Souza, the official White House photographer of Barack Obama and Ronald Reagan, enthralled the audience with hilarious stories of White House practical jokes, insider experience sitting in every single Situation Room meeting of the Obama presidency and his poignant retelling of the days following the Sandy Hook massacre. He showed just a few of the nearly 2 million photos that he took during his eight years as Obama’s Chief Photographer, sharing behind-the-scenes stories of the photos of each. The crowd walked away with an insider’s look at both the presidency and Obama himself.

Souza took the audience on a journey through both the highlights and the lowest moments of Obama’s presidency. “I think to this day President Obama would say the best day of his presidency was when the Affordable Care Act passed,” he said, sharing photos of the journey up to the day the bill passed.

He also described his view stuck in a small corner of the packed situation room on the day of the Osama bin Laden raid, which he described as “one of the most historic days” of Obama’s presidency.

Souza noted how interesting it was to witness some of the most powerful people in the world in the Situation Room that day, yet be powerless to do anything but watch the events unfold. He went on to say that the chair that Obama sat in during that fateful day would be housed in the Obama Presidential Center.

While Souza witnessed historic moments like that, he also captured basketball games, quiet family moments and practical jokes during his eight years with President Obama.

He told the captivated audience how in the midst of the BP oil crisis, Obama was working long hours, yet when he saw his daughter outside playing on the playground outside the Oval Office, he took a minute away to go share a moment with her.

“He was always focused on his daughters when he was in their presence, even if it was only a few minutes,” Souza said.

Following his presentation, Souza took questions from the audience. One question came from Arion Ford, who traveled all the way from St. Louis to attend the event on his 25th birthday. “I couldn’t miss the event,” he said. “Since I follow Pete on Instagram, I saw the post he made about being in Kansas City and had to jump on the opportunity. I met Pete years ago at a town hall with former President Obama during his first 100 days in office, and kept up with his work ever since. It was truly an honor to be at Unity Temple and to see Pete again, a birthday I’ll never forget.”

Ford followed up his first question with a personal request: “Will you take a picture with me?” Souza agreed.

Attendees traveled from throughout the region, including from St. Louis, Chicago, Oklahoma and beyond, to hear Souza speak.

This event was the last in the Saving the White House series, highlighting the temporary exhibit currently on display at the Harry S. Truman Library and Museum, and the focus on presidential matters provides a foray into the Bennett Forum on the Presidency, taking place this year on Nov. 4.

Sign up for our email updates to be the first informed about upcoming events like this. See the photos Souza shared in his presentation and more on his website.