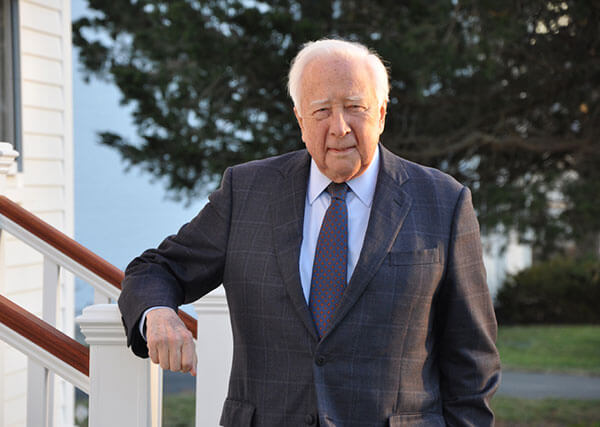 The following is an excerpt from David McCullough’s speech on December 9, 2001, at the rededication of the Truman Library. McCullough is the Pulitzer Prize-winning author of Truman, the definitive biography of Harry S. Truman. He will be honored with the Harry S. Truman Legacy of Leadership Award at Wild About Harry, on Thursday, April 19.

Harry Truman, as we all know, is the frst and only president who ever came from Missouri. He was also the only president in the 20th and 21st centuries who never went to college. But very few presidents … have been so conscious of their predecessors as was Harry Truman… He was never without a sense of history.

In the very first Congress to meet in Philadelphia, another farmer’s son, another plain-spoken, not tall, not handsome, American patriot — John Adams — wrote a letter back to his wife in Massachusetts about his amazement at the range and variety of talents to be seen in the First Continental Congress. “The art and address of ambassadors from a dozen belligerent powers in Europe, nay, of a conclave of cardinals at the election of the pope … would not exceed the specimens we have seen,” John Adams wrote. He was star struck. “Here were fortunes, abilities, learning, eloquence, acuteness equal to any on earth…”

Then about a month later he had a decided change of opinion. The acuteness and minuteness of every issue at hand was wearying him to death. “The business of Congress had become tedious beyond expression. This assembly, like no other that ever existed — every man in it is a great man, therefore an orator, a critic, a statesman. And therefore, every man, upon every question, must show his oratory, his criticism and his political abilities…”

Nearly 150 years later, Harry Truman went to the United States Senate, dazzled, star struck, until old Senator J. Hamilton Lewis came over to give the new senator a piece of advice. “Harry, don’t start out with an inferiority complex,” he said. “For the frst six months you’ll wonder how in the hell you got here, then after that you’ll wonder how the rest of us got here.”

Reading what Adams wrote, reading what Ham Lewis advised Harry Truman, it just underscored one of Truman’s favorite remarks and maybe among his most astute observations: “There is nothing new in the world except the history you do not know.”

“Salus populi suprema lex esto” — Latin taught by Harry Truman’s high school teacher. Latin, drummed into him day after day by Miss Ardelia Hardin. He and Charlie Ross, high school students here in Independence, translated all of Cicero working together day after day. Yes, it is true that Harry Truman is the only president of the 20th and 21st century who never went to college, but it would be a great mistake to assume that Harry Truman was therefore uneducated. He was very well-schooled in English literature, history and Latin.

I have often thought there should be a statue here in Independence for those teachers who so infuenced Harry Truman, particularly Tilly Brown and Ardelia Hart — Tilly Brown his English teacher who raised him on Shakespeare and insisted he and the others in his class understood not just the greatness of Shakespeare, not just the beauty of the language, but the meaning of the language. All writing is thinking, when it comes down to it, which is one of the reasons it is so hard, and Harry Truman learned to think. Harry Truman learned to understand right from wrong.

How can it be, I am often asked, that little Harry Truman, backwater smalltime machine politician could wind up being the president he was — simple little Harry? Well, he wasn’t simple, and he wasn’t little. Giants come in all sizes.

When Truman served in the White House, the presence of his predecessors was a living thing for him. He believed the house was haunted — literally. He loved to take people around on tours of the house, particularly when it was being refurbished … He loved to go into the East Room and describe how in the days when John and Abigail Adams moved into the White House (the first president and first lady to occupy the White House), the room was just a bare lath, and a big barn of a space in which Abigail Adams hung out her washing. He imagined late at night the ghosts of Abraham Lincoln and others walking the halls upstairs. He knew that the upstairs Oval Office, which he had made his study, was the scene of the first party given at the White House by the Adamses on New Year’s Day 1801 — the day it became truly the people’s house, open to the public.

He also knew, I suspected, that it was in that same room, much later in a much different time, on the night of July 11, 1944, a very steamy, hot night, when Franklin Roosevelt met with his political advisers, the big-time, big-city Irish American bosses — Ed Flynn, Ed Kelly, Bob Hannegan — who told him it had to be Truman, to put Harry Truman on the Democratic ticket for that crucial election that was approaching, which of course, we all know FDR did.

John Adams once wrote to his wife Abigail, “We live, my dear soul, in an age of trial, what will be the consequence, I know not.” Harry Truman, echoing very much the same outlook, said we can never tell what is in store for us, and certainly his life is a vivid example to make that point…

Hear David McCullough at Wild About Harry 2018, taking place this Thursday, April 19, or follow along online that evening using the hashtag #WAH2018.