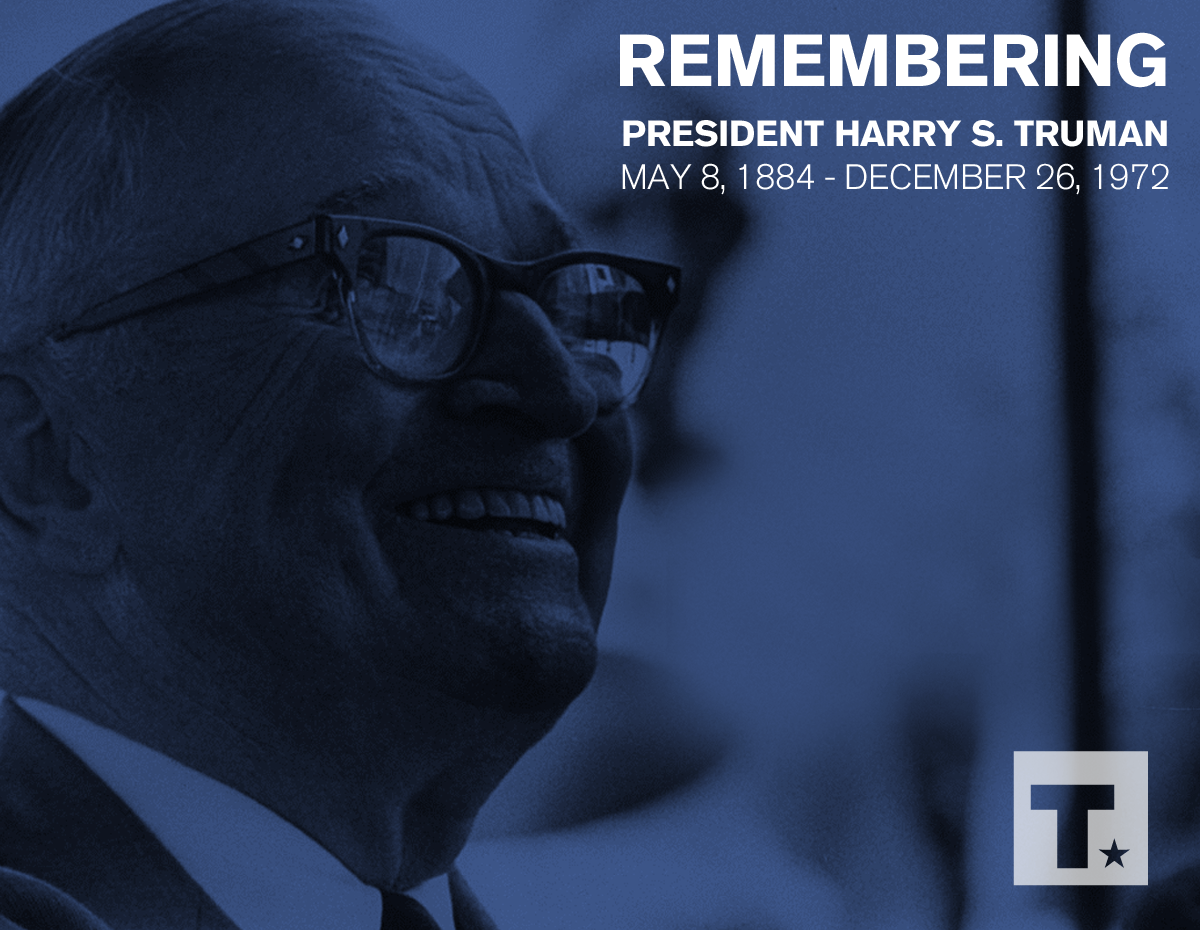 Harry S. Truman passed away on this day in 1972. The former president was 88 years old.

The following week, on January 3 and 4, 1973, 47 Congressmen and 70 Senators offered memorial tributes eulogizing the 33rd President of the United States on the floors of House of Representatives and the Senate, including Senators Robert Dole, Barry Goldwater, Edward Kennedy, George McGovern, Walter Mondale, Stuart Symington, Adlai Stevenson and Strom Thurmond. Republicans and Democrats alike joined together to praise Truman, his decisiveness, his humility and, above all, his service to the American people.

But perhaps our favorite tribute to President Truman came from his hometown paper, The Examiner. Whereas other eulogies focused on Truman’s presidency, the Examiner shone a light on the living legacy of President Harry S. Truman, the cause to which he dedicated his most active years following his presidency – the Harry S. Truman Library and Museum, a site of research, education, reflection, and inspiration.

So moving was the editorial published on the day of his passing that the Honorable William J. Randall of Missouri chose to read it in its entirety into the record of the House of Representatives.

We share it with you now, in its entirety, and invite you all to remember the man from Independence, Harry S. Truman.

The whole world joins us in our sorrow.

Independence was Harry Truman’s home town and a city never had a more loyal citizen. We naturally feel his loss more acutely than any other place could.

But through the years we have shared him with others. First, with Missourians when we sent him to the Senate, and then the nation when he became the 33rd President. And finally with the world as he provided leadership in the post-war years.

And now Harry Truman is dead at 88.

Truman made the presidential library which he chose to locate in his home city, his personal project and he working untiringly, traveled hundreds of miles, and made dozens of speeches on its behalf.

The flag is now at half mast at the beautiful structure on the crown of the hill where Truman spent eight busy, happy years involved in a maze of activities.

“The library will belong to the people of the United States,” he said in the legend for one of the cornerstones. “My papers will be the property of the people and will be accessible to them. The papers of the president are among the most valuable sources of material for history. They out to be preserved and they ought to be used.”

Truman wanted his papers available for “furthering the study of free government and of the participation of the United States in world affairs.”

And as Truman wished and dreamed, his library has been used by researchers who wrote books, and has been visited by more than two-million history-loving Americans. His beliefs and philosophy are perpetuated there.

And students fortunate enough to visit the library in educational groups in the years when the former president kept office hours will never forget his folksy history lessons.

He told them that their government is the greatest in the history of the world and urged them to study their history and “learn what we have.”

Truman made more major decisions in his nearly eight years as chief executive than any other president. Reading, particularly history, a lifelong hobby, gave him invaluable background for his role.

Truman, as no other American president, told it like it was — he said what was on his mind. He was willing to speak up if he felt the occasion justified it, a trait which endeared him to the common man.

Truman, who set out to be a good president, became a great president by doing a good job.

He was willing to fight for what he thought was right. He fought a good fight all of his life, even to the end.

Join Harry Truman’s legacy today by becoming a member. Gifts from our members and donors help preserve the legacy of our nation’s 33rd president and ensure that his library remains a resource and inspiration for generations to come.

Join our email list to receive more Truman updates right in your inbox: