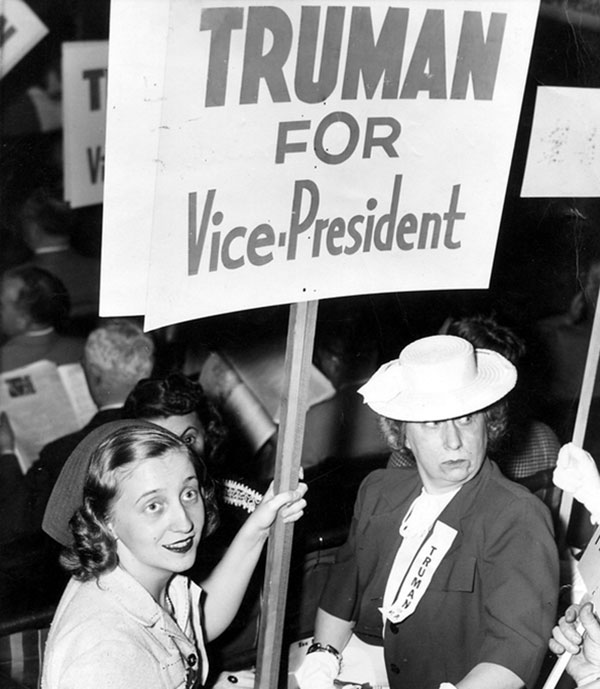 How Truman Became the Nominee for Vice President

Harry Truman did not want to be Vice President and he wasn’t shy about saying so to anyone who asked him, from his colleagues in the Senate to members of his family. “It is funny how some people would give a fortune to be as close as I am to it and I don’t want it,” he wrote to Margaret on July 9, 1944, just 12 days before he would ultimately accept the Democratic Party’s nomination.

In the days leading up to the Democratic National Convention, speculation grew over whose name would appear next to President Roosevelt’s on the ballot. Those aware of Roosevelt’s declining health understood that the stakes were high because the man he selected would likely ascend to the presidency before his term ended.

The incumbent, Henry Wallace, was seen by party leaders as too liberal and eccentric to be a viable candidate. They succeeded in convincing Roosevelt to be open to other possibilities, though he refused to officially endorse another candidate.

The list of Wallace’s potential replacements grew so long that reporters joked that it would be easier to list those who were not candidates. Truman’s name was on the list, along with Senators James Byrnes and Alben Barkley, Associate Justice William O. Douglas and Speaker of the House Sam Rayburn. Byrnes seemed to be the obvious choice at first, enough so that Truman initially agreed to nominate him at the Convention.

Behind the scenes, however, the party leaders had made their choice. They wanted Truman. Byrnes was unpopular among black voters and the labor movement, Barkley was too old, and Douglas was too young. They took their choice to Roosevelt, and after making their case for Truman – and against the other candidates – he agreed that if he couldn’t have Wallace, he’d be satisfied with Truman or Douglas.

Now with Roosevelt’s blessing, the party leaders had to get Truman and a majority of delegates on board with their plan. They were precise in their political maneuvering. They edited the language Roosevelt used to discuss the candidates so that he didn’t seem too enthusiastic about Wallace or Byrnes. They released Roosevelt’s mild endorsement of Wallace, which was considered the “kiss of death” to his chances at the nomination. Then, they leaked that their support was behind Truman, who finally understood the seriousness with which he was being considered.

Still, Truman was hesitant to take on the job. Roosevelt was on the phone when Truman met with Bob Hannegan and the other party leaders to make his choice. When he asked Hannegan whether Truman had agreed yet, Hannegan said that Truman was “the contrariest goddamn mule from Missouri” he ever dealt with. Roosevelt’s response made Truman’s decision for him.

“Well, you tell the Senator that if he wants to break up the Democratic Party in the middle of the war, that’s his responsibility,” Roosevelt yelled into the phone, loud enough for Truman to hear from across the room. He agreed to the nomination, though he remained unsure that a majority of delegates would side with him over Wallace.

The start of the Convention in Chicago was hot and lively. Counterfeit tickets had been acquired by Wallace supporters, who made a great show of support when he made a surprise appearance on the Convention floor. The party leaders worried that their energy would sway delegates. With Roosevelt officially nominated for the fourth time, they were applying pressure wherever they could to ensure that Truman would get the votes he needed and that anyone with counterfeit tickets would be kept out.

When the first ballot for Vice President was taken on July 21, 16 candidates were in the running. This left no candidate with a majority of delegates, though Wallace still led Truman by over 100 votes.

The second vote looked close at first, with Truman only leading by five votes. However, the party leaders’ hard work came to fruition when John Bankhead, a candidate from Alabama, withdrew himself from the running and cast Alabama’s votes for Truman. Other states immediately followed their lead, including South Carolina, Indiana, Ohio and Illinois. The final vote count had Truman with over 1000 votes, defeating Wallace by 926.

Truman accepted the nomination and gave one of the shortest acceptance speeches in American political history. While he won the majority of votes, many were exhausted by the nomination process and were unenthused with Truman, calling him “the Missouri compromise.”

Even so, Roosevelt and Truman were victorious in the general election. Truman had done what he had been so resistant to just months prior – become Vice President of the United States. However, as time would tell, Truman wouldn’t hold the job for long.