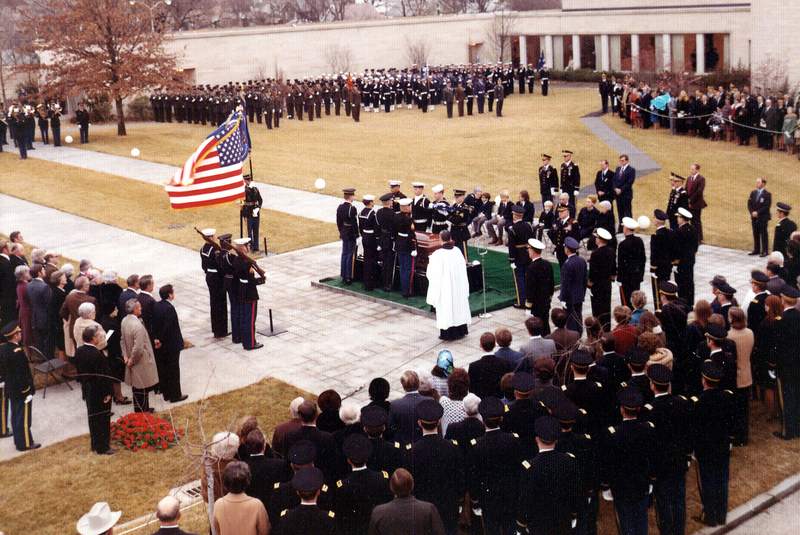 Harry Truman died at 7:50 a.m. Tuesday, December 26, 1972. Within hours, Independence police officers placed barricades on North Delaware Street outside the Truman residence. The news apparently compelled many visitors to leave their homes and drive by the familiar white Victorian home that, since 1953, had housed the Kansas City area’s most prominent resident.

But Truman’s death had not been a shock, as he had been in precarious health for weeks. He had left his home for the last time on December 5 suffering from lung congestion, and had been taken to Research Hospital and Medical Center in Kansas City. Wallace Graham, Truman’s longtime physician, prescribed antibiotics to fight the infection and described the former president’s condition as “fair.”

Doctors revised that to “critical” the next night. The former president’s blood pressure dropped, his temperature fluctuated to a peak of almost 103 degrees, his heart rate raced to 120 beats a minute or more, and his respiration began to fail. Doctors placed an oxygen mask over his face. They administered antibiotics by intravenous injection.

Treatment continued for almost three weeks. Doctors issued eighty medial bulletins to the press corps maintaining a vigil at the hospital. “He’s getting kind of contrary,” Margaret Truman Daniel said during one press conference in early December. “Is that a sign of progress? It’s a very good indication.”

Newspapers tracking Truman’s condition published articles detailing his stamina while he had served as president in his early to middle sixties. During his term Truman had entered a hospital only once, in 1952, when he spent three days recovering from a virus infection.

He maintained his health after leaving the White House, making such a tradition of his morning walks – either while at home in Independence and while visiting in Washington or New York – that a puffing herd of journalists routinely trailed the former president on sidewalks.

In 1954 while attending Kansas City’s Starlight Theater, Truman suffered a gallbladder attack that confined him to a hospital bed for two weeks.

As he grew older, the suggestion of death didn’t seem to unnerve him. When Alden Whitman, chief obituary writer for The New York Times, visited Truman in his library in the early 1960s, Truman noted the occasion by opening a bottle of bourbon and saying, “Let’s start the morning right,” according to Whitman. “I know why you’re here,” Truman added, “and I want to help you all I can.”

In 1963 doctors repaired a hernia, and Truman remained in a hospital bed for twelve days.

In 1964 Truman slipped and feel in a second-floor bathroom at 219 North Delaware, breaking two ribs and suffering a gash over his right eye that took eleven stitches to close. Years later relatives would wonder whether Truman’s decline began after that. In the late 1960s Truman’s sister, Mary Jane, would note how drawn and gaunt the former president had become.

Between 1966 and 1969, Truman visited a local chiropractor more than 250 times seeking relief from an arthritic hip. In 1969 the flu prompted another hospital stay. By the late 1960s Truman was not up to visiting his library office more than occasionally. Episodes of vertigo in the late 1960s and early 1970s helped end his morning walks.

“Harry Is Not At All Well”

Truman was hospitalized for intestinal inflammation in January 1971 and again in July 1972. “Harry is not at all well,” Bess Truman wrote her friend Mary Paxton Kelley that November.

The bulk of December 1972 Truman spent inside Research Hospital in Kansas City, Missouri. Throughout his stay he suffered from bronchitis, heart irregularity, kidney blockage, and a failing digestive system. On December 18 Truman told doctors he felt “all right.” Two days later he was able to follow movement with his eyes and make small gestures with his hand in response to questions.

On December 23, Truman slipped into a coma. Doctors told reporters that the former president was unresponsive and in critical condition. On Christmas Eve doctors described Truman as weakening, suffering from an abnormal heart rate and fluctuating blood pressure. A bulletin issued at seven p.m. on Christmas day noted that fluid was increasing in Truman’s lungs and that his kidney activity was diminishing.

Throughout the three-week ordeal Bess Truman spent her days as well as many nights at her husband’s bedside. Keeley, slipping past the Secret Service, found Bess there one day.

Nothing to Be Done

Margaret, who spent the month shuttling band and forth from her New York home, arrived at Kansas City International Airport just after eight p.m. on Christmas day. Entering the hospital at nine p.m., she grew alarmed at her mother’s fatigued state and after twenty minutes convinced Bess to return with her to 219 North Delaware.

Her father, she later wrote, was in a coma. There was nothing they could do.

The next morning they received Wallace Graham’s telephone call informing them of Harry Truman’s death. To the press, physicians attributed the former president’s passing to a “complexity of organic failures causing collapse of the cardiovascular system.” He was eighty-eight years old.

This article is excerpted with permission from Harry S. Truman: His Life and Times by Brian Burnes.