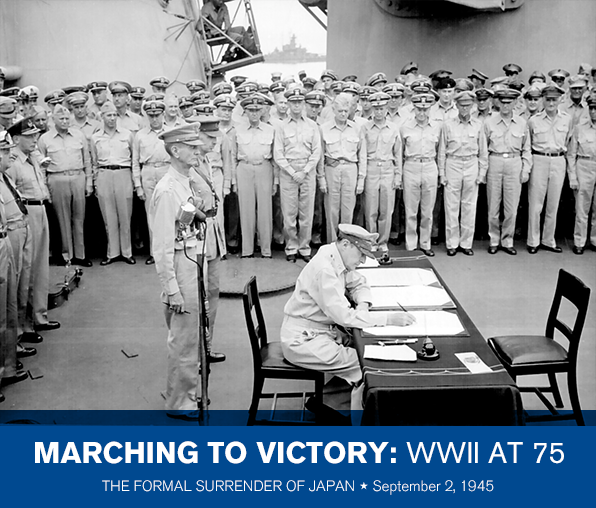 Marching to Victory: The Formal Surrender of Japan
September 2, 1945

It is Sunday, September 2. Some 280 Allied warships and thousands of troops are staged in Tokyo Bay. On the deck of one vessel, the battleship USS Missouri, General Douglas MacArthur and 50 other Allied leaders are assembled. It is not a battle they have prepared for, however, but a brief ceremony. The men aboard the Missouri are about to witness Japan’s formal surrender.

Since 1942, the flamboyant MacArthur had led a campaign that gradually retook the Philippines and other major Japanese strongholds in the Pacific Theater, helping to defeat the empire. After the Japanese agreed to surrender in August 1945, Truman appointed the five-star general to supervise the country’s occupation and rebuilding. But these efforts could not begin in earnest until Japan officially surrendered.

The event was scheduled for September 2, 1945, and Truman directed that it take place aboard the Missouri. Named for his home state, the Iowa-class BB-63 was a veteran of some of the Pacific War’s toughest battles.

Just before 9 that morning, MacArthur and representatives from various Allied nations gathered on deck, most of them wearing simple khaki caps, shirts and trousers. Eleven Japanese officials then came aboard, their ceremonial suits and uniforms contrasting sharply with the plain garb of the Allied officers.

At 9:04, Japanese Foreign Minister Mamoru Shigemitsu hobbled forward on his cane and signed the Instrument of Surrender on behalf of the Emperor. He was followed by General Yoshijirō Umezu, representing the Japanese military.

Now it was the Allies’ turn.

General MacArthur signed as Supreme Commander of the Allied Forces in the Pacific, followed by officials from the United States (General Nimitz), Republic of China, United Kingdom of Great Britain and Northern Ireland, Union of Soviet Socialist Republics, Commonwealth of Australia, Dominion of Canada, Provisional Government of the French Republic, Kingdom of the Netherlands, and Dominion of New Zealand.

MacArthur ended the proceedings with a short address, telling the signatories that he hoped “this solemn occasion” would usher in “a world dedicated to the dignity of man and the fulfillment of his most cherished wish, for freedom, tolerance and justice.”

Twenty minutes after the ceremony began, it ended – and with it, the six-year war that had seen unparalleled destruction and roughly 60 million deaths.

My fellow Americans, and the Supreme Allied Commander, General MacArthur, in Tokyo Bay:

The thoughts and hopes of all America–indeed of all the civilized world–are centered tonight on the battleship Missouri. There on that small piece of American soil anchored in Tokyo Harbor the Japanese have just officially laid down their arms. They have signed terms of unconditional surrender.

Four years ago, the thoughts and fears of the whole civilized world were centered on another piece of American soil–Pearl Harbor. The mighty threat to civilization which began there is now laid at rest. It was a long road to Tokyo–and a bloody one.

We shall not forget Pearl Harbor.

The Japanese militarists will not forget the U.S.S. Missouri.

The president somberly remembered “all those who have helped in this cooperative struggle to preserve liberty and decency in the world,” and concluded by urging Americans to dedicate themselves to winning the peace as whole-heartedly as they had fought to win the war.

Victory always has its burdens and its responsibilities as well as its rejoicing.

But we face the future and all its dangers with great confidence and great hope. America can build for itself a future of employment and security. Together with the United Nations, it can build a world of peace rounded on justice, fair dealing, and tolerance…

God’s help has brought us to this day of victory. With His help we will attain that peace and prosperity for ourselves and all the world in the years ahead.

For the past five months, Harry Truman had led America’s war effort with steady and principled leadership. It was now his job to lead the United States through the new challenges of peace as a world power.