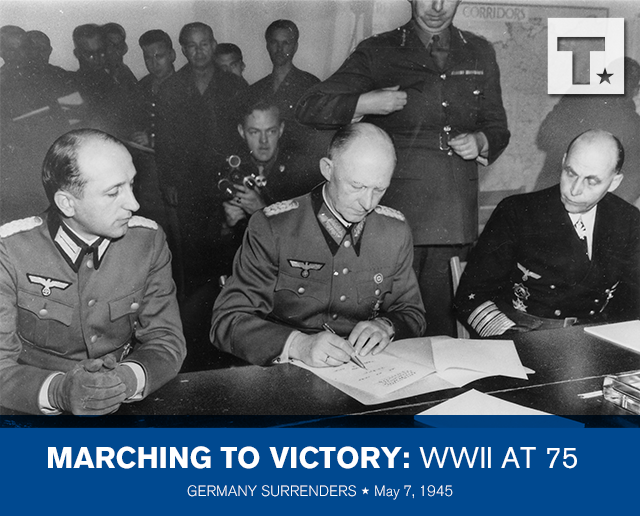 Marching to Victory: Germany Surrenders!
May 7, 1945

Today marks the 75th anniversary of the surrender of Nazi Germany.

On May 7, 1945, the Allied vise slammed shut on what remained of Nazi Germany. With American, British, and French troops advancing from the west and the Soviets overrunning the eastern part of the country, the German high command had little choice but to surrender their battered forces.

In 1944, Allied leaders had agreed that an unconditional surrender of the Axis powers would be the only acceptable outcome of the war. Events in early May of 1945, however, threatened to undermine this goal.

How could the Allies ensure that Germany’s leaders wouldn’t wring concessions from the western Allies, avoid a complete surrender, and prolong the war?

Two very different objects speak to these concerns and the surrender terms that resulted: the German Instrument of Surrender and the pens used to sign it.

The German Instrument of Surrender — an artifact of the National Archives and Records Administration — lays out in black type and austere language Eisenhower’s victory over Jodl in the battle of wills at Reims. The normally genial Ike Eisenhower demanded that Jodl surrender all German forces unconditionally or he would break off negotiations and close the Western front to the Germans, forcing them to deal with the feared Soviets. After calling Dönitz for instructions, the German general returned with his reply: a complete acceptance of Eisenhower’s terms. Shortly after midnight on May 7, Jodl signed the Instrument of Surrender and effectively ended the war in Europe.

The Instrument of Surrender orders German forces to “cease all active operations at 2301 hours Central European time on 8 May and to remain in the positions occupied at that time.” Remembering how the German Navy had sunk its ships in 1918 to avoid surrendering them, the Allied authors of the 1945 document specify: “No ship, vessel, or aircraft is to be scuttled, or any damage done to their hull, machinery or equipment.” The Instrument further stipulates that it is subject to the authority of the United Nations and applies to “GERMANY and the German armed forces as a whole.” (No partial surrender allowed!) The Instrument of Surrender ends with an iron fist: should German leaders or their troops break the agreement, “the Supreme Commander, Allied Expeditionary Force and the Soviet High Command will take such punitive or other action as they deem appropriate.”

While rifts between the western Allies and the Soviet Union over the governance of the postwar world would soon widen into a cold war, all of that was in the future on May 7, 1945. The German surrender that morning brought to a close the deadliest conflict in European history.

The triumphant Eisenhower presented his commander in chief, President Truman, with the pens used to sign the surrender agreement. Those pens are housed at the Truman Library and Museum and will be on display in the First Four Months Gallery when the museum reopens this fall unveiling its transformative renovation.

With Germany defeated, Truman and the American people could now direct their full military strength against Japan. To learn more about the march to victory in 1945, follow this blog and visit the Harry S. Truman Library and Museum upon its reopening later this year.