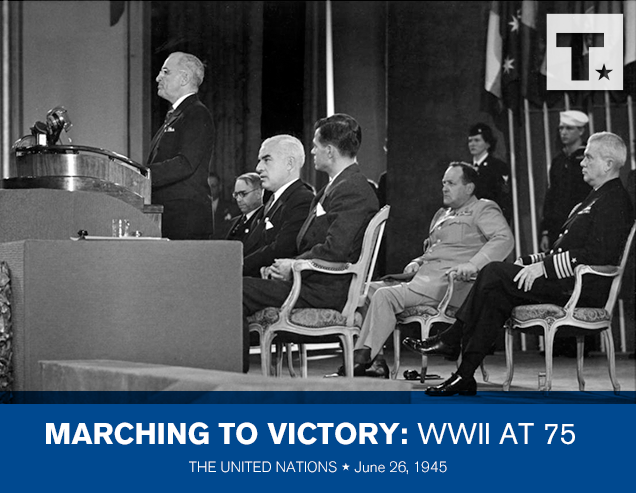 Popular depictions of World War II concentrate on paratroopers, goose-stepping Nazis, Holocaust victims, tanks, aircraft carriers, and other symbols of the world at arms and the deaths of millions of people.

But violence was not the war’s only legacy.

On June 26, 1945, representatives from 50 nations signed the United Nations Charter, establishing an intergovernmental body promoting peace and international cooperation. After the signing, Harry Truman — a wartime president but a lover of peace — gave two statements calling on his fellow Americans to adopt the letter and spirit of the Charter and help the UN achieve worldwide harmony.

By supporting the UN, Truman was carrying on the legacy of his predecessor, President Franklin Roosevelt. In late 1941, Roosevelt and British Prime Minister Winston Churchill drafted an agreement that the Allied powers would commit their full might and cooperation to the war effort and “defend life, liberty, independence and religious freedom, and … preserve human rights and justice in their own lands as well as in other lands…”

This Declaration by United Nations initially was signed by representatives of America, Britain, China, and the Soviet Union; over the course of the war, 21 other Allied nations joined this wartime UN.

In April 1945, as Allied victory drew close, representatives of the member states met in San Francisco to write a treaty for a postwar UN that could arbitrate international disputes without conflict and prevent another world cataclysm.

Americans followed news of the proceedings in San Francisco with intense interest. As reports circulated that representatives at the conference were locked in disagreement over various points in the Charter, a group called the American Association for the United Nations (of which Eleanor Roosevelt was a member) worked to drum up support for the treaty and the UN itself.

Finally, on June 26, 50 nations signed the United Nations Charter, the founding document of the largest international organization in world history. In a preamble and 19 chapters, the Charter lays out the rules and structure of the UN and describes how the body works for global peace, security, and human rights.

Truman closed the United Nations Conference on June 26, 1945 with hope for the promise and possibility of the new international organization:

“Upon all of us, in all our countries, is now laid the duty of transforming into action these words which you have written. Upon our decisive action rests the hope of those who have fallen, those now living, those yet unborn — the hope for a world of free countries — with decent standards of living — which will work and cooperate in a friendly civilized community of nations.

“This new structure of peace is rising upon strong foundations.

“Let us not fail to grasp this supreme chance to establish a world-wide rule of reason — to create an enduring peace under the guidance of God.”

While signing the Charter was a crucial milestone, it could not come into effect without ratification by the five permanent member countries of the UN Security Council, one of which was the United States. On July 2, President Truman brought a copy of the Charter into the Senate and gave a plainspoken yet heartfelt address urging ratification.

Truman — once a senator himself — reminded Congress that the people of the world were watching them. “For they look to this body of elected representatives of the people of the United States to take the lead in approving the Charter…and pointing the way for the rest of the world.” The stakes were high, Truman noted. Twice in the past 30 years, the world’s leaders had failed to avoid bloodshed. “This Charter points down the only road to enduring peace,” Truman proclaimed. “There is no other.” Truman got his wish: The Senate ratified the Charter, other nations followed suit, and it went into effect on October 24, 1945.

Americans’ support for the UN has waxed and waned since 1945, but the body lives on as a powerful force for global peace and human rights. Seventy-five years after its adoption, 193 countries have signed the Charter and joined the United Nations, and the world has not seen another world war. In that sense, the march to victory in 1945 continues to this day.

“Only if [Americans] understand what the Charter is and what it can mean to the peace of the world will the document become a living human reality.”
– Harry S. Truman, July 1945