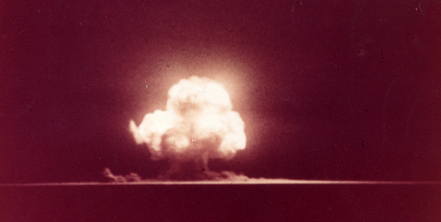 At 5:29 AM on July 16, 1945, an enormous explosion rocked the bleak desert of southern New Mexico. The cause of the blast was a device called the Gadget, which exploded with the force of forty million pounds of TNT. It produced intense heat, a light brighter than the sun, and a mushroom cloud 7.5 miles high that glowed yellow, then red, then purple. People felt the shockwave 100 miles from ground zero, and newspapers reported that a blind woman 150 miles away asked: “What’s that brilliant light?”

“That brilliant light” was the first detonation of a nuclear weapon; the test was given the code name “Trinity” by physicist J. Robert Oppenheimer after a poem by John Donne.

Twenty miles from the epicenter of the blast a small group of observers watched and listened in awe and then broke into cheers. Many had been working toward a successful explosion of atomic weapons since June of 1942, when the U.S. Army began the Manhattan Project, a massive yet secretive effort to harness the new science of atomic energy for Allied victory. Three years in, the Trinity Test was a stunning, deafening, scorching display of nuclear energy’s potential to win the war.

Although President Truman was unable to be at ground zero (he was in Potsdam, Germany, with Stalin and Churchill), the Truman Library’s collection includes a unique memento of the world’s first detonation of a nuclear bomb.

Nearly 26 years after Trinity, Winston Dabney, a member of the Los Alamos Veterans Reunion Committee, presented President Truman with a lump of glass from the testing site. This was not just any glass. The explosion’s heat (at least 2,678 degrees Fahrenheit at ground zero) melted and fused together the sand and bomb pieces that rained down, producing oddly beautiful bits of green glass. The material, called trinitite, is prized by collectors and was initially sold as jewelry – until it was pulled off the market when people realized the dangers of radiation.

Today, this piece of trinitite, which is encased in lucite and labeled “Los Alamos” for the location of the laboratory where scientists and soldiers worked on the weapon, serves as a reminder of Truman’s crucial role in Trinity and the dawning of the Atomic Age.