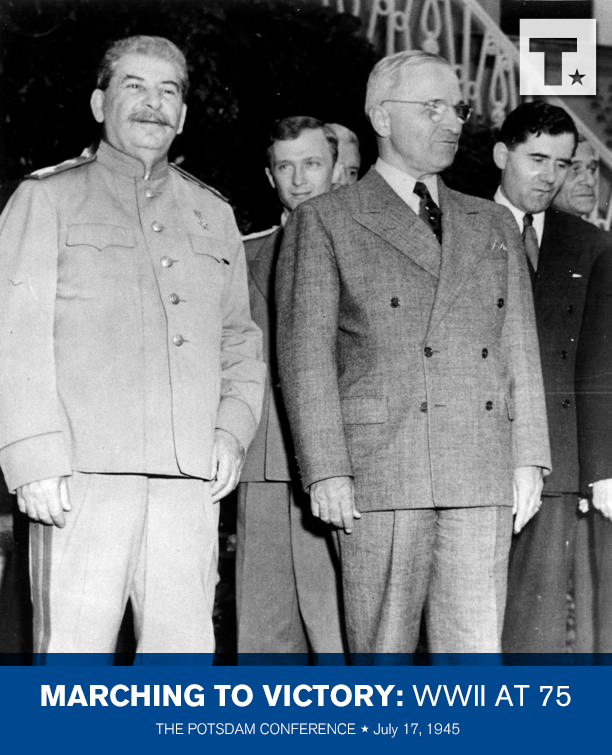 What do you do when you’re about to win a war and your mightiest ally seems just as dangerous as your enemies?

This question loomed large for President Harry Truman when he met with Soviet leader Joseph Stalin for the first time on July 17, 1945.

With Germany defeated and occupied, heads of the “Big Three” Allied nations — the United States, the Soviet Union and Britain — had begun a 16-day conference in Potsdam, Germany, to decide the fate of war-torn Europe. While the world’s most powerful leaders were allies, they held opposing views on the shape of a post-war world.

Truman walked a tightrope at Potsdam. He was growing suspicious of Stalin’s intentions in Europe and needed to take a tough stance against the Soviet suggestion that Germany be completely disarmed. At the same time, President Truman wanted Stalin’s support in ending the war with Japan.

How could this new American president — who lacked any real experience in international relations — hope to achieve such a balancing act? Three items in the collections of the Truman Library and Museum provide insights into the president’s diplomacy during those momentous days in Potsdam: a diary entry, a letter, and a cologne bottle. After his initial meeting with Joseph Stalin, Truman privately expressed relief in his diary:

“Promptly a few minutes before twelve I looked up from the desk and there stood Stalin in the doorway. I got to my feet and advanced to meet him. He put out his hand and smiled. I did the same….After the usual polite remarks we got down to business. I told Stalin that I am no diplomat but usually said yes or no to questions after hearing all the argument. It pleased him. I asked him if he had the agenda for the meeting. He said he had and that he had some more questions to present. I told him to fire away. He did and it is dynamite — but I have some dynamite too which I’m not exploding now….I can deal with Stalin. He is honest — but smart as hell.”

Despite the success of this first meeting, negotiations at Potsdam set the stage for a long and precarious Cold War.

“We have been going great guns the last day or two,” Truman wrote to Bess two weeks into the Potsdam Conference. Although “the Conference was at a standstill because of Uncle Joe’s indisposition,” the Western Allied negotiators “all worked and accomplished a great deal….I rather think Mr. Stalin is stallin [sic]….The whole difficulty is reparations. Of course the Russians are naturally looters and they have been thoroly [sic] looted by the Germans over and over again and you can hardly blame them for their attitude….”

Truman’s letter also reveals the toll that long diplomatic engagements have on those involved. “I’ll sure be glad to see you and the White House and be where I can at least go to bed without being watched,” he wrote to Bess.

DIPLOMACY IN THE AIR: A COLOGNE BOTTLE One of Truman’s aids brought home a small souvenir from the tense negotiations: a bottle of German cologne. After returning to his Potsdam apartment from a meeting, Truman discovered the cologne in his bathroom. The Soviets, who were hosting the conference in a section of Germany they controlled, left the gift for President Truman. Upon discovering the bottle, President Truman emerged from the bathroom holding the bottle and grinning. “‘It looks like the Russians are trying to make a German stinker out of me,” he quipped. In the midst of difficult negotiations, President Truman kept his sense of humor.