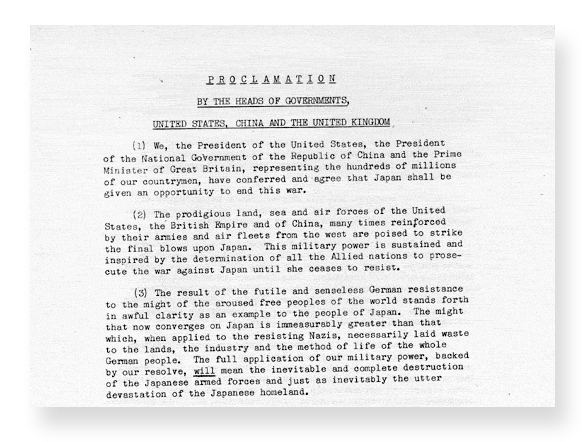 By July 1945, Japan was defeated nearly everywhere except in the hearts and minds of the Japanese. Even as the Japanese Empire crumbled and the suffering Japanese prepared for invasion, military leaders reminded their people that national honor prohibited surrender to the Allies.

On July 26, however, the leaders of the United States, the Republic of China, and Great Britain demanded that Japan do that very thing. In the Potsdam Declaration, they promised a vague yet dire scenario for the Japanese should they refuse to yield. U. S. President Harry Truman, the main architect of the document, was not optimistic but noted in his diary that the Allies were giving the Japanese a chance “to surrender and save lives.”

The Declaration began by offering Japan an escape from Armageddon. “The full application of our military power, backed by our resolve, will mean the inevitable and complete destruction of the Japanese armed forces and just as inevitably the utter devastation of the Japanese homeland”—unless the nation surrendered now. “The time has come for Japan to decide whether she will continue to be controlled by those self-willed militaristic advisers whose unintelligent calculations have brought the Empire of Japan to the threshold of annihilation, or whether she will follow the path of reason.”

The three Allied powers next laid out their terms. Japan must end “for all time the authority and influence of those who have deceived and misled the people of Japan into embarking on world conquest, for we insist that a new order of peace, security and justice will be impossible until irresponsible militarism is driven from the world.” The Allies would occupy Japan’s outlying territory until these leaders were removed and the country disarmed and Japanese soldiers returned home “to lead peaceful and productive lives.”

“We do not intend that the Japanese shall be enslaved as a race or destroyed as a nation,” the Declaration continued, “but stern justice shall be meted out to all war criminals, including those who have visited cruelties upon our prisoners.” Japan’s government also had to soften its rigidly autocratic system, permit democracy, and protect human and political rights.

The Allies pledged to help the Japanese rebuild their war-ravaged economy. All industry was allowed except that for war-making. “To this end, access to, as distinguished from control of, raw materials shall be permitted. Eventual Japanese participation in world trade relations shall be permitted.” Once the Japanese met the Allied terms and formed a democratic government, occupying troops would depart.

The Declaration ended with ominous words that have echoed ever since. “We call upon the government of Japan to proclaim now the unconditional surrender of all Japanese armed forces, and to provide proper and adequate assurances of their good faith in such action. The alternative for Japan is prompt and utter destruction.”

The Potsdam Declaration thus gave the Japanese a way out of the war that avoided complete ruin and unconditional surrender. Tragically, Prime Minister Suzuki Kantaro and Japan’s military leaders ignored the ultimatum, sealing the fate of hundreds of thousands of their countrymen. In the coming weeks, the Japanese would learn what the Allies meant by “prompt and utter destruction.”

The Harry S. Truman Library and Museum’s digital archives includes this reproduction of the Potsdam Declaration.