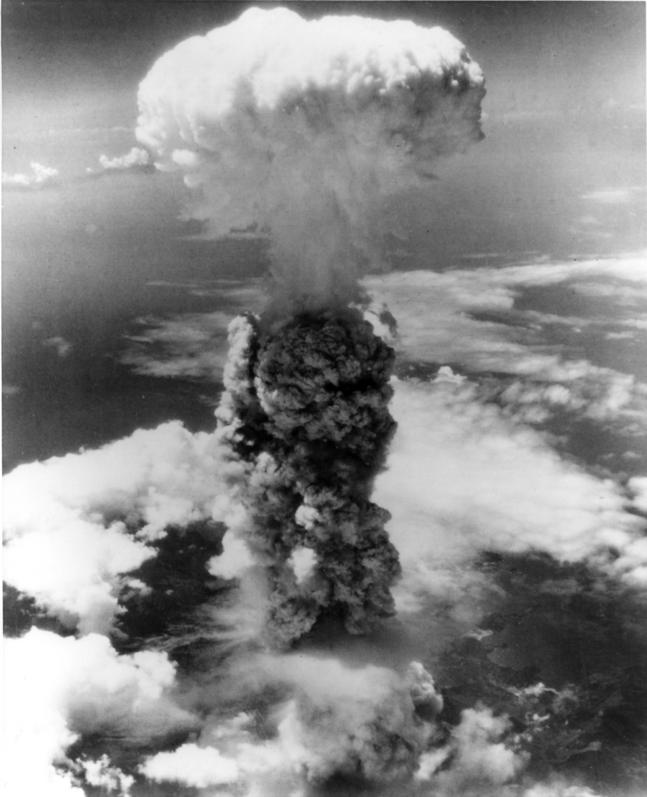 Visitors to the Harry S. Truman Library and Museum can view a unique artifact that speaks to the revolutionary power and danger of the weapon that destroyed Nagasaki and helped end World War II.

Early in the morning on August 9, six B-29 bombers took off from an air base on the Pacific Island of Tinian. Major Charles W. Sweeney’s Bockscar carried “Fat Man,” a plutonium bomb of the type tested earlier at Alamogordo and more powerful than the uranium bomb dropped on Hiroshima.

Their target was the city of Kokura, home to one of Japan’s large ammunition arsenals. However, a bout of bad weather, spawned by a powerful typhoon, spelled doom for a different Japanese city.

In the summer of 1945, Nagasaki was a thriving city, still relatively untouched by the war, despite its shipyards and munitions factories. For the city’s quarter-million residents, that good fortune would be reversed in a mere 48 hours, beginning on August 7.

On that day, Japanese Emperor Hirohito received confirmation that the United States had leveled Hiroshima with an atomic bomb the day before. Despite the news, Hirohito and the Big Six, Japan’s Supreme War Council, refused to make peace. Japan would carry on the war, they determined, even should atomic bombs continue to devastate what remained of their cities. Not even news on August 9 that the Soviet Union was attacking in Manchuria caused Japan’s leaders to budge, and they enacted martial law to prevent any efforts at surrender.

Japan’s intractability prompted the U.S. high command to order Colonel Paul Tibbets, Jr. – leader of the Hiroshima mission – to carry out a second atomic bombing, this time on the city of Kokura. For months, Tibbets had coordinated with Manhattan Project personnel and trained his crewmen intensively for their top-secret mission.

Before taking off from Tinian, and ever mindful of Fat Man’s extreme danger, the crew of Bockscar kept the bomb’s two electrical safety plugs engaged as they lifted off the island. These green plugs were designed to prevent a detonation in the event of a crash on takeoff. Upon ensuring that all the plane’s engines were running smoothly, weaponeers Commander Frederick Ashworth and Lieutenant Philip M. Barnes replaced the green plugs with red safety plugs.

Fat Man was armed and ready for detonation.

However, when the airmen reached Kokura, they discovered that thick clouds and smoke obscured the city. With a fuel pump on Bockscar malfunctioning and Japanese antiaircraft fire getting closer, they decided to hit their secondary target – Nagasaki.

At 11 a.m., Sweeney and his crew arrived over their new target and released the bomb. It exploded with the force of 21 kilotons of TNT, destroying almost half of Nagasaki and instantly killing at least 35,000 people (with many more dying in the coming months).

Their mission complete, the B-29s headed for the American base at Iwo Jima, but the rapidly depleting fuel supply on Bockscar forced them to make an uncleared landing on Okinawa. Sweeney’s plane landed with two dead engines and only five minutes’ worth of fuel remaining.

That night, Emperor Hirohito and the Japanese cabinet met in Tokyo for a contentious debate on whether the time had come to surrender. Over the next few days, the Emperor would make his decision.

When the Harry S. Truman Library and Museum reopens later this year, visitors will be able to view a unique artifact that speaks to the revolutionary power and danger of the weapon that destroyed Nagasaki and helped end World War II: one of two green safety plugs from Fat Man, donated by Lt. Barnes to the Truman Library in 1988.