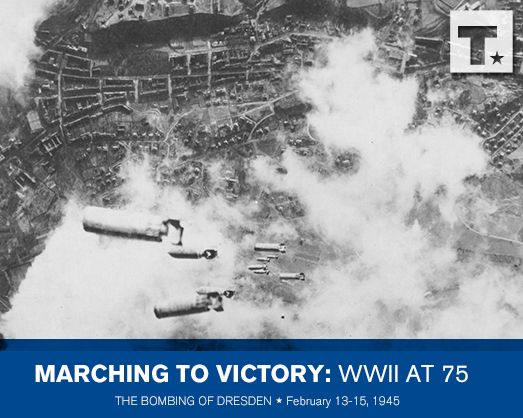 Marching to Victory: The Bombing of Dresden

Seventy-five years ago, the Allied nations joined forces to defeat fascist brutality in Germany and Japan. That march to victory, however, was not without its own horror. Then as now, the bombing of Dresden exemplifies the cruelty of that cruelest of wars.

Before February 1945, few could have predicted that the beautiful, historic city of Dresden would become a target for Allied bombers.

Dresden seemed safe from the British and U.S. air forces’ “area bombing” campaign that was designed to break Germany’s means and will to defeat the Allied forces. Although there was little war industry there and the lack of defenses made it easily vulnerable to capture, from February 13 to 15 British and American planes dropped nearly 4,000 tons of bombs on Dresden. The resulting explosions and firestorm almost completely leveled the city. The vulnerability of the city’s residents added to the horror. Dresden was a center for Allied prisoners of war and German refugees, and the population had little protection from aerial attack. Scholars recently estimated the death toll at up to 25,000 people.

Among the American POWs who endured the terror were Kurt Vonnegut and Gifford Doxsee, young infantrymen who had been captured two months earlier in the Battle of the Bulge. Vonnegut and Doxsee were part of a group housed in a compound in Dresden called Schlachthof-fünf, or Slaughter-House Five.

The Truman Library’s fifteen million pages of historic documents include an 18-page, single-spaced letter from Doxsee describing his WWII experiences, including the bombing of Dresden.

In his letter, Doxsee recounts being awakened after midnight on February 13. The Slaughter-House Five prisoners were marched to a makeshift air-raid shelter two stories below ground while…

“…the armada of U.S. Air Force planes pounded Dresden in the most intensive bombing of any single city anywhere in the world, ever, that night….After the all-clear sounded, toward 3 a.m. on Wednesday morning, Feb. 14, 1945, our guards roused us again and forced us to climb back up to ground level. There we beheld another never-to-be-forgotten spectacle: the entire city of Dresden burning around us in all directions.”

According to Doxsee’s letter, the Germans put Doxsee and other surviving Allied POWs to work in the ruins of Dresden after the attack. “During these two months,” he relates, “our principal daily activity consisted to [sic] cleaning up debris and rubble caused by the Allied bombing of the city.” Sometimes the labor was grimmer:

“Occasionally…we also had to seek out corpses of German casualties from the bombing and convey these to central locations from which they were moved to funeral pyres set up in varying parts of the city.”

Doxsee was eventually freed and repatriated to the United States, where he later became a professor of history. Kurt Vonnegut achieved much greater fame as a novelist; his classic Slaughterhouse-Five includes a harrowing recreation of the Dresden bombing and several other events mentioned by Gifford Doxsee.

For veterans, historians, and much of the general public, the phrase “World War II” evokes complex feelings. Seventy-five years ago, the people of the Allied nations worked together to defeat brutal, fascist regimes in Germany and Japan. Yet there is no denying that the Allied militaries sometimes used ruthless means on the march to victory. Then as now, the bombing of Dresden exemplified the cruelty of that cruelest of wars.

Gifford Doxsee’s letter is archived as part of the Robert S. Raymond papers and is available for viewing at the Harry S. Truman Library and Museum. The Research Room is open to the public, by appointment. Learn more

PHOTO: Bombs fall on Dresden, February 15, 1945. Some strikes were able to be made visually on the marshaling yards, but many bombs were released “in the blind” over the city with inaccurate radar guidance. (National Archives and Records Administration)