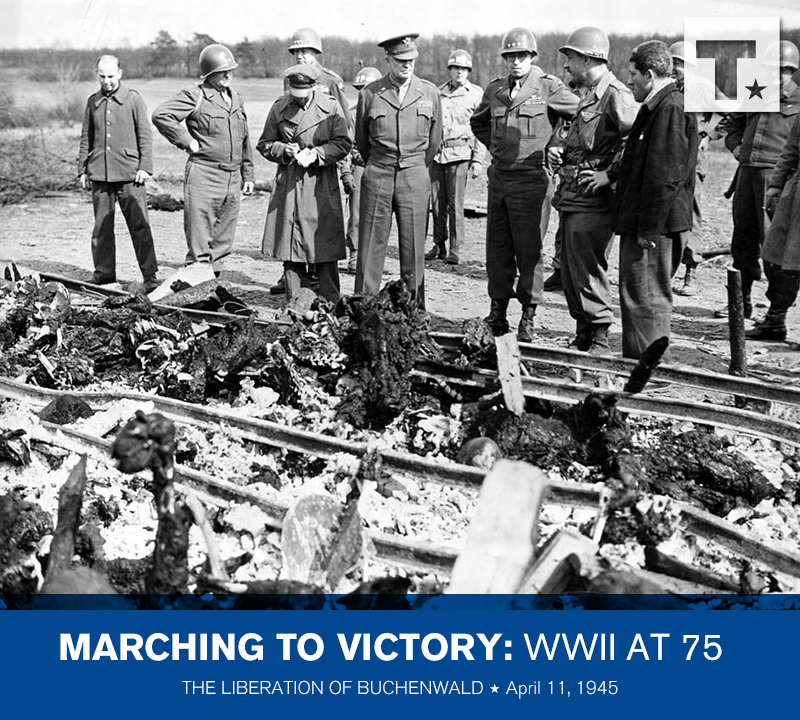 Marching to Victory: The Liberation of Buchenwald
April 11, 1945

On April 11, GIs of the 6th Armored Division entered Buchenwald, the main camp in a large complex of concentration camps near Weimar that had recently been abandoned by German troops. American soldiers who liberated the camp were met by thousands of emaciated camp survivors. Shortly after the camp’s liberation, Bernard Bernstein reached Buchenwald and came face-to-face with the horrors of the Nazi Holocaust. His story is part of the Truman Library’s archives, and it begins here…

In early April 1945, the Nazis’ world was collapsing in on them. The once-powerful military forces of the Third Reich could no longer hold back the Allied tide after more than five years of war. And, as American, British, and Soviet troops advanced ever deeper into Germany from the east and west, they discovered huge caches of looted goods that had financed the German war machine—as well as shocking evidence of the brutality of Hitler and his henchmen. Allied troops found “a great quantity of gold and other treasure in a salt mine at Merkers, Germany.” The collection of loot contained “valises filled with the loot taken by Germans from the victims in the concentration camps,” including wedding rings and gold fillings wrenched from prisoners’ mouths. Recognizing the need to keep these valuables out of Soviet hands, Supreme Allied Commander General Dwight D. Eisenhower quickly looked for someone to “take control of the matter.”

Bernard Bernstein, a New Yorker who had worked as a Treasury Department lawyer before joining the war effort as a military government advisor on Eisenhower’s staff, was that man. Bernstein supervised a feverishly quick relocation of everything from the salt mine to the Reichsbank in Frankfort. These events were depicted in the popular book and film The Monuments Men.

Bernstein’s oral history reveals that he soon found that German thievery like that uncovered in Merkers was only the tip of the iceberg. On April 11, GIs of the 6th Armored Division entered Buchenwald, the main camp in a large complex of concentration camps near Weimar that had recently been abandoned by German troops. American soldiers who liberated the camp were met by thousands of emaciated camp survivors. Shortly after the camp’s liberation, Bernstein reached Buchenwald and came face-to-face with the horrors of the Nazi Holocaust. Thirty years later, he vividly recalled,

“As we came through the entrance to the main building there were three trucks…filled with naked corpses. Then I went into one of the buildings where there were furnaces and there was half a body lying in one of the furnaces. I also saw the hooks on the walls where bodies were hanged before burning.”

The horrors of what the Allies found shocked Eisenhower and his principal generals, Omar Bradley and George S. Patton, into action. As Bernstein remembered,

Even the famously tough Patton “was still showing a sense of deep emotion and shock that he said the three generals experienced when they saw these frightful scenes at the concentration camps” when Bernstein met him.

Eisenhower planned to have eminent Americans tour the camps to expose their conditions to the world.

Bernstein noted that Eisenhower and his staff also “made great efforts to help the inmates who were still alive in the concentration camps and these victims were fed, given clothing and taken care of, given medicine and so on. I think the record of the American Army in this respect was outstanding.” Meanwhile, Allied forces continued their advance on Berlin for a final battle with the regime responsible for the Holocaust.

To read Bernard Bernstein’s oral history and other accounts of the march to victory in Europe, explore the remarkable collections of the Harry S. Truman Library and Museum.

PHOTO: While on an inspection tour of the newly liberated Ohrdruf concentration camp (subcamp of Buchenwald), General Dwight Eisenhower and a party of high-ranking U.S. Army officers, including Generals Bradley, Patton, and Eddy, view the charred remains of prisoners that were burned upon a section of railroad track during the evacuation of the camp. Also pictured is Jules Grad (third from the left taking notes), correspondent for the “Stars and Stripes” U.S. Army newspaper. Photographed by Colonel Meches; Ohrdruf, [Thuringia] Germany; April 12, 1945. Courtesy of National Archives and Records Administration, College Park.