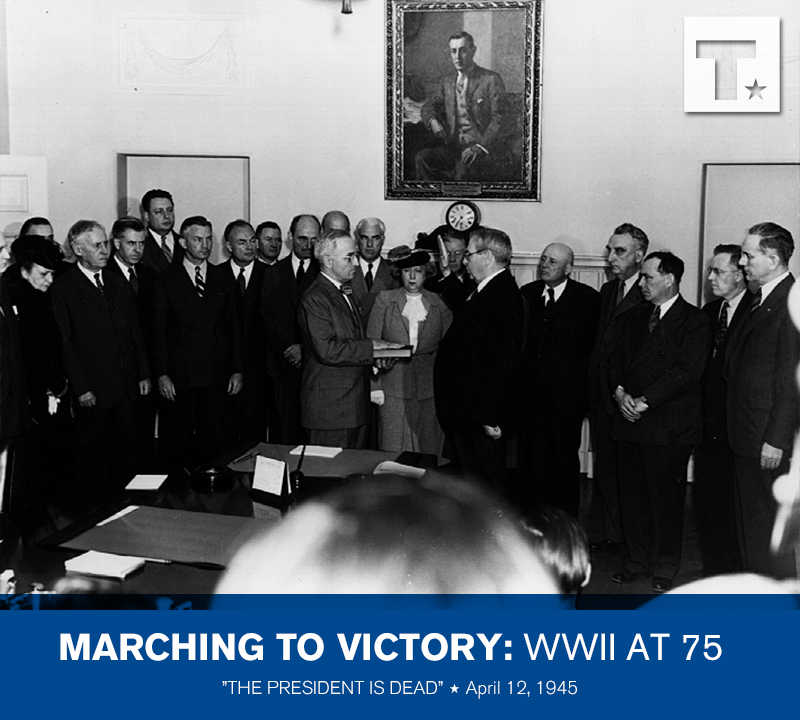 On the afternoon of April 12, 1945, Vice President Harry S. Truman was just starting to relax after a day of presiding over the Senate when he was urgently summoned to the White House. There he received the unwelcome news that President Franklin Roosevelt had died and that he, Truman, was now president.

Truman said he “felt like the moon, the stars, and all the planets had fallen on me.” He was replacing a beloved and dynamic Chief Executive who had led America through depression and war, and was now faced with the task of leading America to victory in World War II. Worse still, Roosevelt had left Truman largely out of the loop during the latter’s vice presidency—Truman was not even aware of the Manhattan Project and other crucial matters. In assuming the presidency, Harry Truman also assumed a daunting burden. Whether he would measure up to the task of leading the free world remained to be seen.

A collection of letters edited by Steve Neal and featured on the Truman Library’s website shows that the new president retained his personal touch and concern for others despite the great responsibilities he faced. As the website notes, the correspondence between President Truman and former First Lady Eleanor Roosevelt documents the evolution of “a formal, often wary, political relationship” into “a strong friendship” that impacted American history.

Eleanor Roosevelt kept a close watch on the progress of the war and other important events. She and Truman frequently exchanged messages of support. Often the letters discussed weightier matters. Two days after Germany’s surrender on May 8, for example, Truman wrote to Roosevelt explaining why he had rejected the Nazis’ offer of a separate peace with the western Allies as they continued fighting the Soviet Union. British Prime Minister Winston Churchill pressured Truman “to break faith with the Russians” and accept the terms, but Truman refused.

“I have been trying very carefully to keep all my engagements with the Russians,” he confided to Eleanor Roosevelt, “because they are touchy and suspicious of us. The difficulties with Churchill are very nearly as exasperating as they are with the Russians.” Only after Truman threatened to have the German leaders executed as traitors did they conform to their earlier agreement of a total surrender. The fact that Truman asked Roosevelt to keep the details of the event secret until their official release reveals that, even in the earliest days of his presidency, Truman viewed Roosevelt as a trusted insider.

Truman’s May 10, 1945 letter also speaks to one of the most pressing items on his mind: how to forge world peace. “[P]atience,” Truman wrote, “must be our watchword if we are to have world peace. To have it we must have the wholehearted support of Russia, Great Britain, and the United States.” The former First Lady responded, agreeing that patience was necessary. She then gave Truman advice on dealing personally with Churchill and the Soviets based on her personal experience. Clearly, the May 8 letter was the beginning of a very consequential friendship.

In December 1945, Truman appointed Roosevelt to represent him in the newly formed United Nations. As a UN delegate, Roosevelt worked tirelessly as a humanitarian and became chairperson of the UN’s Commission on Human Rights. In 1948, she helped enact the Universal Declaration of Human Rights, which established worldwide standards of human rights for the first time.

In a letter dated December 29, 1948, Roosevelt again advised the president on matters related to the Soviet Union. Roosevelt urged Truman to keep the United States at the forefront of the struggle against Soviet aggression. “[W]e have to prove to the world and particularly to downtrodden areas of the world which are the natural prey to the principles of communist economy that democracy really brings about happier and better conditions for the people as a whole,” she wrote.

Truman and Roosevelt did not always agree, but, despite their differences, they maintained respect and affection for one another throughout their lives. The Truman-Roosevelt correspondence, which continued until 1960, chronicles the end of World War II, the beginning of the Cold War, and U.S. politics.

Photos: (Top) Truman is sworn in as president following the death of FDR, April 12, 1945, courtesy of the Harry S. Truman Library and Museum; (Bottom) Eleanor Roosevelt, Truman, and Sam Rayburn at the Harry S.Truman Library in Independence, Missouri on July 5, 1957, courtesy of National Archives and Records Administration, College Park.