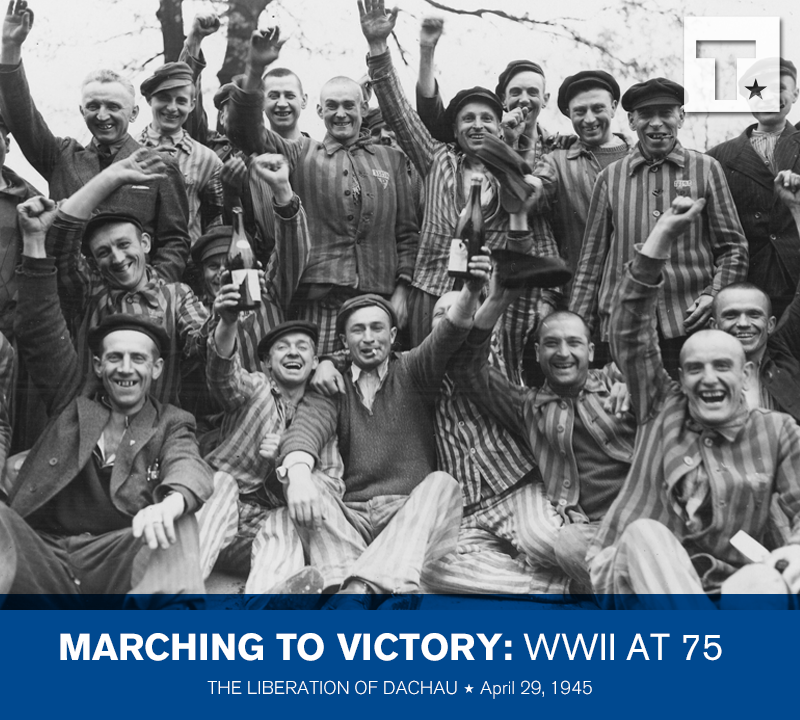 Marching to Victory: The Liberation of Dachau
April 29, 1945

In April 1945, as the European war neared its end, one question loomed large: how would the Allies ensure that justice was served to the perpetrators of Dachau and other Nazi crimes against humanity?

In the long list of terms from World War II that produce a shudder in humanity’s collective psyche, the name of Nazi Germany’s first concentration camp occupies a special place.

On April 29, 1945, American troops captured Dachau and satellite camps, liberating some 30,000 survivors and ending a twelve-year nightmare. From its opening in 1933 as a model concentration facility to its liberation in 1945, more than 200,000 people were imprisoned at Dachau, and an estimated 41,500 died through sickness, malnutrition, overwork, or deliberate killing.

In April 1945, as the European war neared its end, one question loomed large: how would the Allies ensure that justice was served to the perpetrators of Dachau and other Nazi crimes against humanity?

The Harry S. Truman Library and Museum houses an extensive collection of personal papers, oral histories, and presidential files documenting the long process of securing that justice. For instance, the President’s Secretary’s Files contain a copy of Truman’s Executive Order 9547 (issued May 2, 1945), by which Truman appointed Supreme Court Justice Robert H. Jackson “to act as the Representative of the United States and as its Chief of Counsel in preparing and prosecuting charges of atrocities and war crimes against such of the leaders of the European Axis powers and their principal agents and accessories as the United States may agree with any of the United Nations to bring to trial before an international military tribunal.”

On April 29, 1945, the day the U.S. Seventh Army’s 45th Infantry Division liberated Dachau, Justice Jackson sent a memorandum to President Truman. In it, he agrees to Truman’s request that he “undertake to prepare and present the case against war criminals to a United Nations military tribunal.” Jackson continues that he considered the work “a grave responsibility.” He then lays out his ideas for handling the matter, including acting swiftly – “I would sacrifice perfection to expedition,” he noted. Jackson also suggests a procedure for the tribunal.

In 1945 and 1946, Justice Jackson and other members of the International Military Tribunal and the War Crimes Commission of the United Nations tried numerous German leaders at Nuremberg, Germany; later, the U.S. military conducted its own series of cases at Nuremberg against other war criminals. Nuremberg-related items at the Truman Library include correspondence between Jackson and the president, reports and transcripts of court proceedings, and “vividly descriptive letters” about the trials written by Katherine Fite Lincoln, an assistant to Jackson.

Collectively, the thirteen Nuremberg trials shed light on a litany of Nazi horrors—including the crimes at Dachau—resulted in death sentences for 24 men and a host of lesser punishments for others, and became a milestone in the development of international justice.

Photos: (Top) Dachau survivors cheer the arrival of U.S. troops; courtesy of the National Archives and Records Administration; (Bottom) Nuremberg defendants in their dock; courtesy of the Harry S. Truman Library and Museum