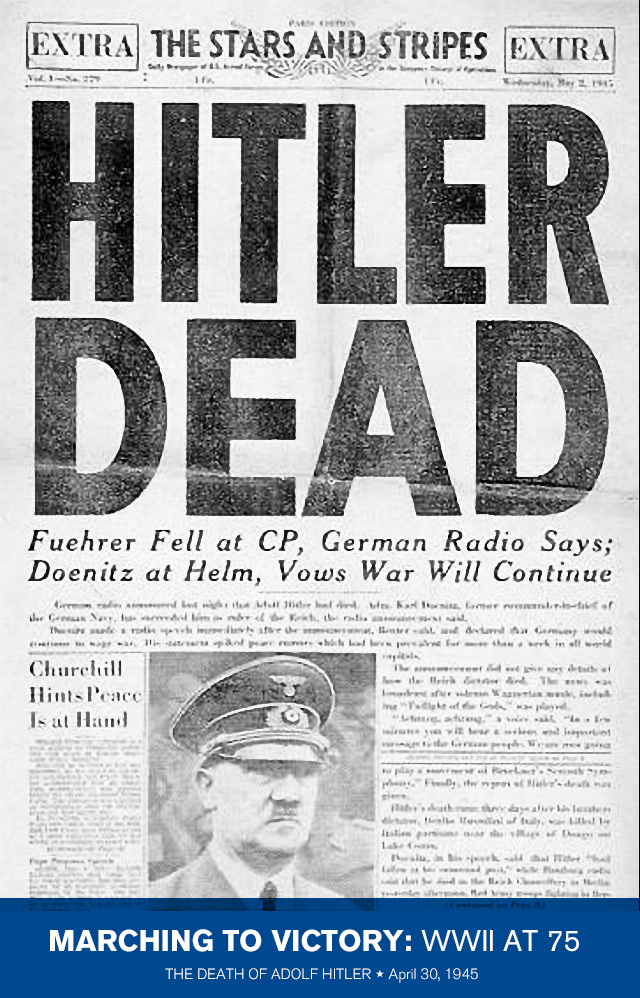 Marching to Victory: The Death of Adolf Hitler
April 30, 1945

75 years ago today – with the Red Army only blocks away – Hitler killed himself in the Führerbunker beneath the city streets of Berlin.

Two days later, on May 2, 1945, Truman met with the press in the White House for what was only his fifth press conference as president.

The press conference started with five relatively mundane announcements: Truman announced and responded to the resignation of Frank C. Walker, the postmaster general; he notified the press that he would nominate Robert E. Hannegan as Walkers’ replacement; he informed the press that he also nominated David E. Lilienthal to be a member of the Board of Directors of the Tennessee Valley Authority; and that the president had issued an executive order appointing Supreme Court Justice Robert H. Jackson as America’s representative on an international military tribunal to try war criminals.

After the announcements, Truman opened the floor to questions.

Eighteen reporters peppered the president with thirty-two questions about wartime negotiations, plans for a V-E Day address, the Polish problem, if the president had lunch with the new ambassador to Argentina, Senator Murray’s bill for full employment, and a number of other topics.

It was not until the twenty-second question that the sixteenth reporter called on finally asked about the death of the Axis leaders.

“Mr. President,” the reporter began, “would you care to comment on the death of Adolf Hitler reported, or Mussolini?”

Truman’s response indicated the looming problem of how to serve justice to Axis leaders who had wrought such havoc on Europe: “Well, of course, the two principal war criminals will not have to come to trial,” Truman said, “and I am very happy they are out of the way.”

“Well, does that mean, sir, that we know officially that Hitler is dead,” the reporter pressed.

The transcript of the press conference reveals that when the reporter pressed Truman for official confirmation of the details of Hitler’s death, Truman tread cautiously.

Q. Do we know how he died, Mr. President?

THE PRESIDENT. No, we do not.

Q. Mr. President, I didn’t quite get that. Is it official? This is confirmation that Hitler is dead?

THE PRESIDENT. We have the best–on the best authority possible to obtain at this time that Hitler is dead. But how he died we are not–we are not familiar with the details as yet.

Q. Could you name the authority, Mr. President?

THE PRESIDENT. I would rather not.

Q. Mr. President, do you mean that the–you are convinced that authority you give is the best possible, but it is–but that it is true?

The next reporter called upon changed tactics, trying to get Truman to comment on details about the end of the war he had not yet been able to confirm. News traveled slower in 1945 than it does today. Even then, to paraphrase the ancient Greek playwright Aeschylus, “truth is the first casualty in war.” As Allied armies marched to victory over Nazi Germany in late April of that tumultuous year, Americans on the home front—even President Truman—struggled to keep up with the rush of events. Rumors of major war developments often took several days or weeks to be officially confirmed or denied, and Truman was careful not to spread false or premature information.

Q. Mr. President, do you care to comment at all on the situation in Germany today; that is, would you care to make any extension of your remarks on the surrender of the German army in Italy?

THE PRESIDENT. No, I would not.

Q. Mr. President, do you contemplate a radio broadcast imminently?

THE PRESIDENT. No, I do not.

Q. Mr. President, there have been reports late–later today, following the Italian announcement, that other groups of Germans are on the point of surrendering in the Dutch pockets?

THE PRESIDENT. I hope that is true. I don’t know that it is.

The last reporter called upon tried to get Truman to comment on Mussolini’s execution.

Q. Mr. President, is there anything you can give us in the way of background, regarding last Saturday’s situation and announcement?

THE PRESIDENT. What was that? [Laughter]

Q. I think that was the one

THE PRESIDENT. I can’t give you anything further on it, I am sorry to say.
Reporter: Thank you, Mr. President.

For a full transcript of President Truman’s May 2, 1945 press conference, visit TrumanLibrary.org.