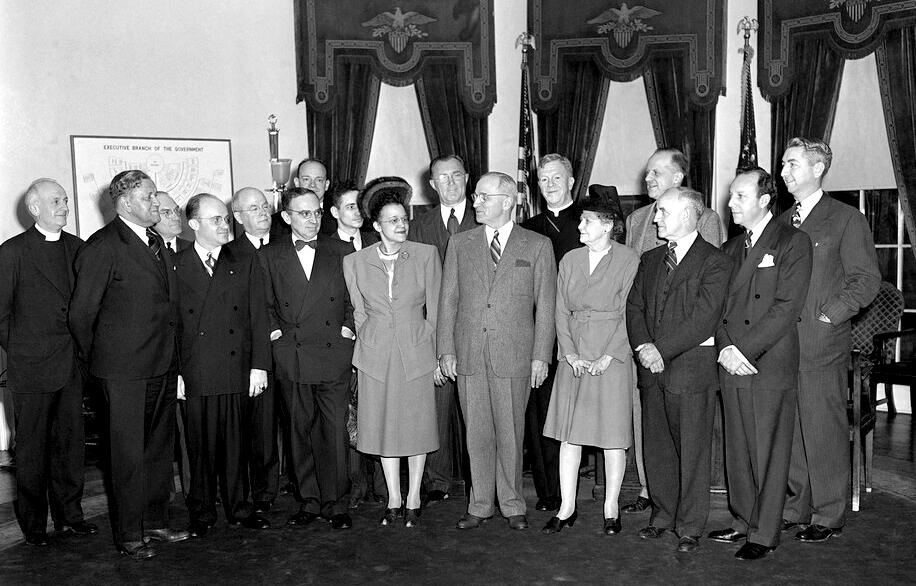 Last year, in a letter to you, we shared another. February 12, 2021 was not only the 212th anniversary of Abraham Lincoln’s birth but also the 75th anniversary of the blinding of Isaac Woodard, a brutal event that, arguably, helped usher in the greatest civil rights progress in this nation since the Emancipation Proclamation.

Just last week, we became aware of yet another fascinating coincidence of dates in American history. Stay with us, and you’ll discover why we’ve chosen to share this story today, on Martin Luther King, Jr. Day.

For those of you who have been following us through the 75th anniversaries of Harry Truman’s presidency, you’ll recall that last month marked the 75th anniversary of Executive Order 9808, Truman’s landmark decision to form the President’s Committee on Civil Rights (pictured above).

The presidential order came at the end of a year of horrific violence against Black Americans, WWII veterans in particular. Maceo Snipes served in the Pacific during World War II and returned home to make history as the first Black person to vote in Taylor County, Georgia, an act for which he was murdered by a white mob. Earlier that year, Isaac Woodard was on his way home, still in uniform, when he was brutally blinded. And on July 25, 1946, George W. and Mae Murray Dorsey, and Roger and Dorothy Malcom were dragged from their car near Moore’s Ford in Georgia and lynched by a mob.

The public nature of the Moore’s Ford lynching, especially, gained national press attention. President Truman demanded a federal investigation and offered a $12,500 reward for information leading to a conviction. That’s more than $150,000 in today’s dollars, and yet the FBI and a grand jury failed to deliver justice. President Truman later referenced the Moore’s Ford lynching as influencing his decision to issue Executive Order 9808 and to create the President’s Committee on Civil Rights.

And here’s where we circle back to the coincidence of dates.

On Wednesday, January 15, 1947, the Civil Rights Committee convened its first meeting. Generally, committee meetings aren’t celebrated by historians. But in this case, the findings and recommendations of the advisory group would guide civil rights reform for a generation. Their report to President Truman, “To Secure These Rights,” directly challenged segregation and racial discrimination and ultimately led Truman to desegregate the military and the federal workforce, and paved the way for historic civil rights legislation during the Johnson administration.

On that same day –January 15, 1947 – Martin Luther King, Jr. celebrated his 18th birthday. He was a sophomore at Morehouse College.

Was there any hint that the teenager would one day play a leading role in the history unfolding in Washington, D.C.?

As it turns out, yes. The very same events that led to Executive Order 9808 prompted the young Martin to pen his first op-ed. In the letter, then 17-year-old King was critical of those who stoke the flames of fear and “kick up dust” to “obscure the real question of rights and opportunities.” Years later, King, Sr. said that he and his wife had “no intimation” of their son’s “developing greatness” until he wrote that letter, which was published by the Atlanta Constitution and favorably received.

How remarkable to look back at a single date and discover that on Martin Luther King Jr.’s birthday, Truman’s committee on civil rights was beginning the work of creating the basic document that would shape the very movement that King would one day lead, the cause to which he gave his life.

Today, as we celebrate the birth of Martin Luther King, Jr., we are reminded that history is made not by heroes. History is made by individuals who are responsive to the events of their time – courageous individuals, both citizens and elected representatives, who have a deep understanding of our founding ideals and an unwavering commitment to the rights guaranteed by the United States Constitution.

As ever, may our history guide our future. As ever, thank you for helping us shine the light on our nation’s story and Truman’s legacy, as we inspire the next generation of heroes and history makers. 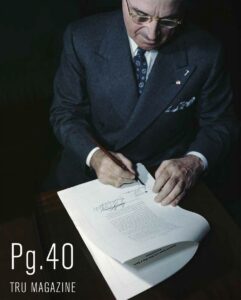 Executive Order 9808 and the President’s Committee on Civil Rights

On December 5, 1946, Truman made the following statement: “Freedom from fear is more fully realized in our country than in any other on the face of the earth. Yet all parts of our population are not equally free from fear….I have, therefore, issued today an Executive Order creating the President’s Committee on Civil Rights and I am asking this committee to prepare for me a written report…” Read Executive Order 9808

“I want our Bill of Rights implemented in fact. We have been trying to do this for 150 years. We’re making progress, but we’re not making progress fast enough.” 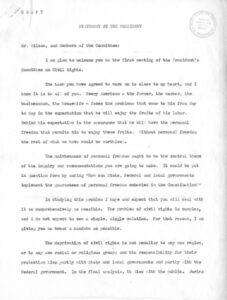 Truman prepared a carefully crafted statement for the Committee’s first meeting: “The task you have agreed to work on is close to my heart….The problem of civil rights is complex, and I do not expect to see a simple, single solution. For that reason, I am giving you as broad a mandate as possible….I wish you every possible success in your inquiry. I will be eagerly awaiting the results of your work.” View this historic document

“Juries have refused to convict; witnesses have withheld information. Enforcement of statutes is part of the problem, and I hope you will deal with it; but I hope you will go beyond that and consider ways and means of gaining public acceptance of the principle of civil rights.” 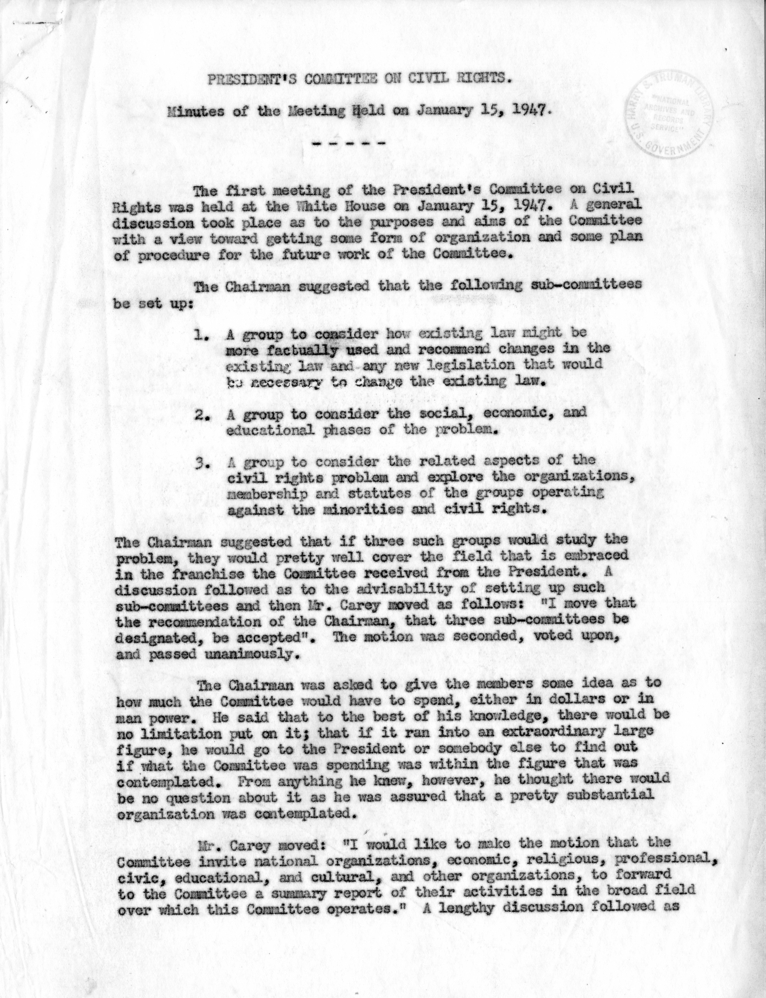 How did a presidential advisory committee succeed in setting the stage for landmark civil rights reform? The answer may be in the minutes. At the first meeting on January 15, 1947, the group unanimously approved three subcommittees – one that would consider existing laws and new legislation; another that would consider the social, economic and educational impacts of the problem; and a third to investigate organizations and statutes that actively undermined minorities and civil rights. View the Jan. 15 meeting minutes

“Today, Freedom from Fear, and the democratic institutions which sustain it, are again under attack….The preservation of civil liberties is a duty of every Government – state, Federal and local.”

Experience Civil Rights history and more in the all-new, awe-inspiring Harry S. Truman Presidential Library and Museum. The spectacular $29 million renovation is being hailed nationwide as “the new standard for presidential libraries.” In accordance with guidelines set by the National Archives, hours are currently limited with advance tickets required.